We are giving away a pair of tickets to Lawrence, MisterWives @ Crystal Ballroom on May 29. To win, comment below on this post why you’d like to attend. Winner will be drawn and emailed May 23. 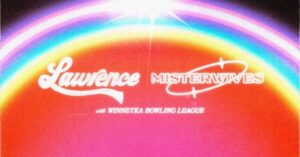 “The brother/sister musical phenomenon you need to hear.” – Affinity

“Lawrence is already a force to reckon with — and they’re only getting started.” – LadyGunn

“Each [song] was keyboard-driven, energetic and featured the mind-blowing vocal arrangements of Clyde and Gracie.” – Pancakes and Whiskey

“If this groovy corner of the New York City scene is going to take the world by storm, Lawrence may well be its best bet for the future.” – Live For Live Music

“The rich nine-piece arrangements pay tribute to Motown, Muscle Shoals, and everything in between…” – Relix Magazine

“Soul-Pop duo on the edge of a breakthrough.” – Popdust

“Lawrence is carefully carving out a place for themselves in pop music and redefining the genre along the way.” – Femme Riot

As NPR writes, “siblings Clyde and Gracie Lawrence are not your typical pair.” Clyde Lawrence and Gracie Lawrence have been writing songs and listening to countless Stevie Wonder, Randy Newman, and Aretha Franklin records in their family’s New York City apartment since they were little kids. After years of playing together, they officially created Lawrence, an eight-piece soul-pop band comprised of musician friends from childhood and college. The band has since gained a devoted following for its high-energy, keyboard-driven sound, which features tight, energetic horns and explosive lead vocals.

In July 2021, Lawrence released their new album, Hotel TV, and became the first band to release music under Beautiful Mind Records, the label of Grammy-winning producer/songwriter/artist Jon Bellion, who co-produced and co-wrote the songs on the album along with Clyde, Gracie and their bandmates Jordan Cohen and Jonny Koh. The tracks on Hotel TV have garnered tens of millions of streams across all platforms and have had multiple viral moments on Tik Tok and Instagram. Most recently, the album’s lead single, “Don’t Lose Sight,” is currently featured in an international Microsoft commercial, which has propelled it into the Top 20 on the USA Shazam Pop Charts and has led it to begin receiving airplay on Top 40 radio stations across the country.

MisterWives
An intensely personal reflection on growth in unexpected places, MisterWives’ latest album SUPERBLOOM marks a moment of major transformation for frontwoman Mandy Lee and her bandmates: Etienne Bowler (drums), William Hehir (bass), Marc Campbell (guitar), and Mike Murphy (saxophone). The New York City-bred band’s third full-length, the 19-track epic finds MisterWives greatly expanding their already-adventurous sound, introducing new textures and colors to their magnetic form of indie-pop. On the album’s soul-stirring title track, MisterWives close out SUPERBLOOM with a moment of pure triumph and a profound sense of possibility. With its chorus including a lyric Lee later adopted as a mantra in times of self-doubt (“I deserve congratulations, ’cause I came out the other side”), “SUPERBLOOM” draws much of its power from its graceful arrangement of so many potent elements: soulful horns and luminous piano melodies, hard-hitting rhythms and gospel-choir harmonies. That joy ultimately infuses all of SUPERBLOOM, instilling even the most anguished songs with an irrepressible radiance and warmth. And in sharing personal struggle with so much honesty and open-heartedness, MisterWives hope to spark a similar courage in each listener.