We are giving away a pair of tickets to Pedro The Lion @ Revolution Hall on June 2. To win, comment below on this post why you’d like to attend. Winner will be drawn and emailed May 31. 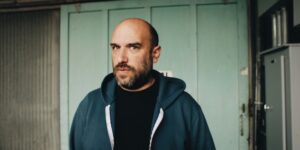 Lake Havasu is a community of winding hillside roads, launched in the 1960s alongside a brick-for-brick rebuild of the original London Bridge. “It’s this very synthetic, gimmicky place set in this soulful, desolate landscape,” laughs Pedro the Lion’s David Bazan, who moved to the Arizona city for one year in seventh grade. Bazan collected his earliest childhood experiences for 2019’s Phoenix, the prolific artist’s celebrated return to the Pedro moniker and the first in a planned series of five records chronicling his past homes. To write its sequel, Bazan traveled to Havasu four times over several years, driving past his junior high campus, a magical skating rink, and other nostalgic locations that evoked feelings long suppressed. “An intersection I hadn’t remembered for 30 years would trigger a flood of hidden memories,” he says. “I was there to soak in it as much as possible.”

To revisit his past with openness, Bazan modified harmful work habits he’d accepted as necessary. That meant doing away with deadlines, and accumulating moments of play as he felt moved to—“Rather than squeezing stones every single time. I’m on a slow journey away from that,” he clarifies. As he worked through the music that became Havasu, flexibility and curiosity informed the arrangements. Bazan began writing on a simple synthesizer and drum machine setup. He detoured to a more elaborate assortment of analog electronic equipment, then woodshed his original two-handed keyboard arrangements on fingerpicked acoustic guitar.

Though Bazan wrote, arranged, and performed most instruments himself—as is characteristic of most of his work, solo and with Pedro the Lion—several key collaborators helped him find the self-accepting tenderness needed for Havasu. Pedro live drummer Sean T. Lane makes appearances on every track, but on a self-constructed noisemaking instrument called “the bike.” It’s composed of various metal objects and strings mounted on a bicycle frame, rigged with contact mics and run through a drone-accentuating pedalboard. “It can be percussive, it can be ambient. It’s a real nightmare machine. It’s just great,” Bazan enthuses, highlighting its crucially menacing counterpoint to the otherwise “wistful, melancholy, guilty pleasure romcom” progression of “Own Valentine.” A warm moment exploring his synth setup with longtime collaborator Andy Fitts led to the insistent new wave sound of “Too Much.” And on album opener and cinematic scene-setter “Don’t Wanna Move,” a riff appears that was first devised by Pedro guitarist Erik Walters and used on Phoenix’s closer. “I was psyched to open this record with it,” Bazan says. “I’m trying to have a flow between the records, so if people want to engage with that, there’s something there.”