We are giving away a pair of tickets to Night ONE of Murder by Death & Amigo the Devil: Tour from the Crypt @ Revolution Hall on September 8. To win, comment below on this post why you’d like to attend. Winner will be drawn and emailed September 6. 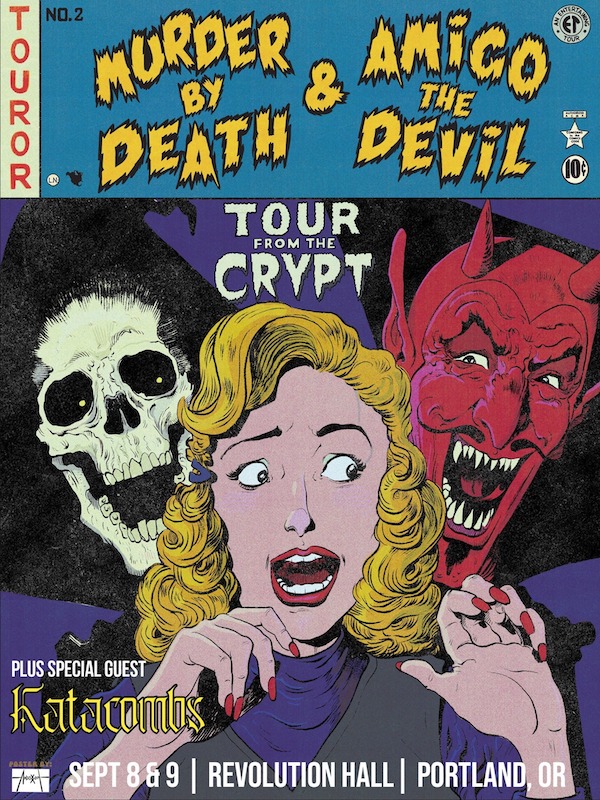 As trailblazers of the early 2000s indie-Americana style, the Louisville, KY-based quintet finds a way of taking tried & true rock-and-roll and knocking it slightly off axis, into tottering revolutions of something eerie, emotional, immediate, lush, and uniquely theirs.

On the surface, Murder By Death is a Louisville, KY sextet with a wry, ominous name. But behind the geography and moniker is a band of meticulous and literary songwriters matched by a specific brand of brooding, anthem-riding balladry and orchestral indie rock.

Murder By Death’s path began in the early 2000s as most Midwestern college-town groups do, by playing to small crowds at ratty venues and frenzied house parties. While many of their formative-year scene-mates failed to make it much further than campustown’s borders, Murder By Death translated their anonymous beginnings into a 20+ year career founded on a bedrock of eight full-length albums, tireless D.I.Y. touring and performing ethics, and, most importantly, a dedicated, cult-like fanbase.

Danny Kiranos, the Austin-based songwriter behind the Amigo the Devil project, has somehow managed to meld the worlds (and fanbases) of traditional folk, country music, rock, and metal into one. The sonic experience is morbid, yet poetic and oddly romantic. His unique artistic perspective and ability to connect with audiences has allowed him to amass a dedicated, cult-like fan-base. Loaded with sing-alongs – and an unsuspecting dose of humor to make otherwise grim topics accessible for fans of every genre – the songs still remain deeply rooted in the tradition of story-telling…something that seems to be a lot less common nowadays. Attending an Amigo the Devil show is an experience: you become one with a wildly prophetic man, armed only with his entrancing voice and a banjo, and bear witness to an astounding performance that will stick with you for a long time.
A key figure in the U.S. ‘murder folk’ scene, Kiranos was initially influenced by the likes of Tom Waits, Nick Cave and Godspeed! You Black Emperor. Following a number of well-received single and EP releases, the debut album by Amigo the Devil ‘Everything Is Fine’ was produced by Ross Robinson, renowned for his work with major league hard rock/metal acts such as Korn, Slipknot, At The Drive In, and Glassjaw. The album also features drummer Brad Wilk (Rage Against the Machine, Audioslave, Prophets of Rage) sitting in on the entire recording session.

“The Fellowship” – as Amigo’s die-hard fans refer to themselves – continues to grow with each new show played and album released. His continued connection with audiences and unique, empathic lyrics are sure to carry Amigo the Devil into the hearts of many more. There is hope in the volatile, peace in the macabre, and light not just inside the tunnel but all around, and Amigo the Devil is here to tell us how.