We are giving you another chance to WIN a pair of tickets to Mimi Webb @ Mission Theater on September 24. To win, comment below on this post why you’d like to attend. Winner will be drawn and emailed September 19. 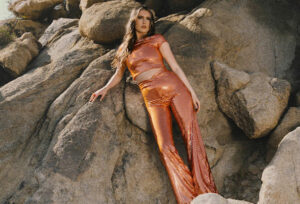 The loudest ones light up the room the brightest. Mimi Webb projects a voice as magnetic, massive, and magical as her personality. As “the girl next door” with a hell of vocal range, she’s quick to laugh, will let you know precisely what’s on her mind, and isn’t afraid to be heard.

Originally hailing from the UK town of Canterbury, the pop singer and songwriter turns up the volume on every emotion with skyscraping runs and open-heart honesty. After amassing over 250 million streams and hundreds of millions of views and receiving widespread acclaim from Wonderland, teenVOGUE, Refinery 29, Euphoria, Consequence of Sound to name a few, she shines on her 2021 debut Seven Shades of Heartbreak EP for Epic Records and much more music to come.

For all of this runaway success, she still describes herself in the humblest of UK slang…
“I’m very ‘gobby’,” she laughs. “It means I want to be loud. I’m not a whisperer, and that comes out in my music. I try to write very emotional and real songs. I hope you feel like I’m singing my story to you.”

That story begins in Canterbury in the English countryside. Throughout her childhood, Mimi performed at school talent shows since the age of six and even appeared on the long-running BBC show EastEnders at one point. As soon as she heard Adele’s 19, she constantly chased down the sensation it gave her. “Music would give me goosebumps,” she admits. “I always wanted to produce the same feeling in what I’m doing.” Inspired by the likes of Amy Winehouse, Emelie Sandé, and Sam Smith, she started writing songs of her own at 13-years-old in diaries before eventually learning guitar. Around the same time, she enrolled in The BRIT School-known for alumni such as Adele, Amy Winehouse, Jessie J, and more. Three years later, she left home, moved in with a host family, and attended the prestigious BIMM [British Institute of Modern Music].

“Since BIMM was two hours away from Canterbury, my family wasn’t able to move with me,” she says. “I broke up with my boyfriend because of the distance, so I was going through huge heartbreak and all of these changes. It was daunting, but my love for music kept me going. I always said to myself, ‘I’m not turning back. I won’t miss. I need to get out of my little town, because otherwise it’s not going to happen’.”

In 2019, she uploaded a handful of early compositions and collaborations online. These wound up in the hands of her now-management as she picked up and left again: this time for the U.S.

At the top of 2020, she unveiled her debut single “Before I Go,” which gathered 17 million Spotify streams and dominated TikTok with 85.7million views, 13.7M likes, 304.2K comments, and 132K shares. She maintained this momentum with “I’ll Break My Heart Again.” Of the latter, Wonderland claimed, “Already it seems Webb has carved out her own niche of balladic pop, packed with vocal dynamite and stirring instrumentals, and on “I’ll Break My Heart Again” things are no different.”

Along the way, she crafted Seven Shades of Heartbreak. Prior to its arrival, she made waves with international hits “Good Without” and “Dumb Love.” The singles concurrently captured places in the Top 15 on the UK Singles Chart, which cemented Mimi as “the first UK female artist, since Dua Lipa in 2017, to land two singles in the UK Top 15 before the release of her debut album.” Combined with the follow-up “24/5,” she had also amassed nearly 300 million streams by the release of Seven Shades of Heartbreak.

Now, the seven-track project illuminates every facet of her as a vocalist and songwriter. She leans into a smoky jazz beat on “Heavenly” with soul and style, while her voice careens above acoustic guitar and sweeping harmonies on “Halfway.” The energetic “Little Bit Louder” heads straight to the dancefloor with its bright piano and bolder chorus. Ultimately, “Lonely In Love” illustrates Mimi at her most vulnerable as she chronicles a fleeting romance in heartbreaking detail before pleading, “Can you just stay one night?”

In unprecedented fashion, she sold out every date on her first-ever UK tour, while BBC Radio 1 added her to the “Brit List.” Reeling in further acclaim, Teen VOGUE raved, “Her voice, textured and versatile, shines as she sings about young love, ‘the kind that cuts you up inside’,” and OnesToWatch attested, “With Webb showing no signs of stopping anytime soon, this feels like just the beginning for one of the UK’s youngest and brightest stars.”