We are giving away a pair of tickets to Mdou Moctar @ Revolution Hall on August 24. To win, comment below on this post why you’d like to attend. Winner will be drawn and emailed August 15. 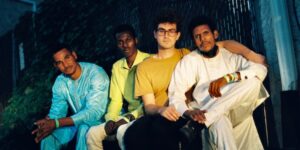 Mdou Moctar’s home is Agadez, a desert village in rural Niger. Inspired by YouTube videos of Eddie Van Halen’s six string techniques and traditional Tuareg melodies, he mastered the guitar which he himself built and created his own burning style. A born charismatic, Mdou went on to tell his story as an aspiring artist by writing, producing & starring in the first Tuareg language film: a remake of Purple Rain called Akounak Tedalat Taha Tazoughai – which translates to “Rain The Color Of Blue With A Little Red In It”, winning the approval of his family and his community. The word and the sound travelled across West Africa via mobile phone data cards, a popular form of local music distribution. Gruelling DIY world tours and albums on the independent US label Sahel Sounds followed, including 2019’s landmark Ilana: The Creator album that earned Mdou Moctar an ecstatic international audience.

Recording and honing songs as a touring outfit forged a livewire new sound, and If Ilana was a late ’60s early ’70s ZZ Top and Black Sabbath record – Afrique Victime is mid ’70s to early ’80s Van Halen meets Black Flag meets Black Uhuru. The ferocity of Moctar’s electric guitar and the band’s hypnotic rhythm section are on awe-inspiring display on songs like “Chismiten” and the mournful yet incandescent title track. Elsewhere, Moctar finds inspiration in highlighting lesser known facets of the group: “While people have gotten to know Mdou Moctar as a rock band, there is a whole different set of music with this band done on acoustic guitars which we wanted to incorporate into this album in order to go through a sonic journey,” he says. Mdou pays homage to one of his heroes Abdallah Ag Oumbadagou, the legendary Niger musician and political revolutionary, on songs “Habibti” and “Layla”. “Abdallah was a contemporary of Tinariwen and helped to pioneer the sound of Tuareg guitar music blended with drum machines and electronic sounds”.

The needs of Agadez are a major part of what drives Moctar as an artist, and promoting the region’s youth through music is an especially personal cause. “I know what it’s like to have been in that position,” he says, “to not have the support of your family, or the money for guitars or strings, it’s really hard. I have a lot of support from the younger generation, because I help them out a lot. When I get back from tour, I give them gear that I bought while I was away so they can go out and form their own bands.”