We are giving away a pair of tickets to Max Gomez @ Lola’s Room on September 30. To win, comment on this post why you’d like to attend. Winner will be drawn and emailed September 27. 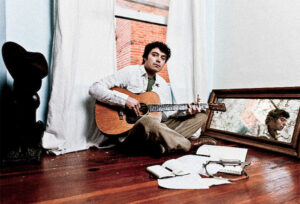 The most northern of the New Mexico pueblos, the hamlet of Taos, sits approximately 7,000 feet above sea level. It is an hour and half drive north of Santa Fe, or rather, just remote enough to stave off the casually curious person. Fiercely independent, the town, steeped in natural beauty, has long attracted artists and freethinkers of every stripe. It is within this bouillabaisse of nature, art and spirituality that we encounter Max Gomez. A young singer-songwriter in the seasoned vein of Jackson Browne and John Prine, Gomez grew up splitting his time between the sloping mountains of Taos and, for a period, the rolling plains of Kansas. On his family’s ranch in Kansas, Gomez still lends a hand with chores but relishes the time he can spend out on the lake practicing the art of fly-fishing. But it is in Taos, where he was ultimately inspired to explore his art and the ethos behind it.

The son of an artisanal furniture craftsman, Gomez grew up watching his father, learning the tools of the trade while simultaneously learning his way around the frets of his guitar. The workmanlike quality of his songwriting carries over from his days spent in the woodshed through an economy of words, phrase and narrative. A blues enthusiast from an early age, the young Gomez immersed himself in the primordial Delta and traditional folk blues of Lead Belly, Big Bill Broonzy and, of course, Robert Johnson. Though 1,200 miles and decades removed from his Mississippi heroes, Gomez had his imagination to fill in the gaps. Having honed his chops on the blues, Max turned his interest to traditional American folk music; “I’m influenced by the old stuff,” Max admits. “To me, that’s the best music.” As the Harry Smith anthology gave way to contemporary masters Townes Van Zandt, Kris Kristofferson, Guy Clark and John Hiatt, so did Gomez’s songwriting. “The songs I write are not real straightforward. You have to decode them. I like when the listener has to create their own story, rather than be told what’s happening.” In short, storytelling that oscillates between everyman poetics and enigma.

In the span of its ten songs, the Jeff Trott (Stevie Nicks, Sheryl Crow) produced Rule The World traverses varying themes of heartbreak, regret, young love, desperation and, ultimately redemption. “Run From You”, the album’s first single and co-written with Trott, reveals Max’s story telling skills. Gomez explains, “Sometimes I refer to this one as an anti- love song. We all come across trouble and often take the wrong road even when we know we should turn back.” With his smoky voice, Gomez sings of desperation for change on “Rule The World” and on “Never Say Never”, young love is likened to a “cool kiss in the August summer heat,” as the protagonist laments its fleeting nature. While the LP’s pop instincts are evident, Rule The World is balanced by Gomez’s love of roots music; see the blues-driven “Ball And Chain.”

While many young artists write songs with the mere intention of entertaining the masses, Max’s songs are filled with the raw emotion and capture the spirit of those who came before him. In an age of ever increasing false fronts and posturing, it’s rare to catch a glimpse of a soul bared. But that is exactly what Gomez has done.