We are giving away a pair of tickets to Matt Alber, Jon Garcia (Album Release) @ The Old Church Concert Hall on December 9. To win, comment below on this post why you’d like to attend. Winner will be drawn and emailed December 6. 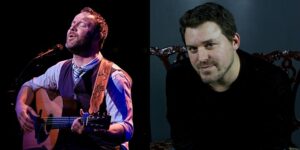 Matt Alber is a Portland-based singer/songwriter, filmmaker & elementary educator. His songs are reminiscent of Rufus Wainwright, David Gray & The Indigo Girls and he is delighted to be singing his debut concert at The Old Church with his dear friend Jon Garcia. Matt is joined by Aaron Elliot on bass guitar, Jason Elliot on drums/percussion and Adam Boomer on electric guitar. Matt’s music can be found on all the usual streaming platforms and he encourages you to check out his latest documentary TV series, Queer As Fundamental (Queer AF*) now streaming at www.queeraf.tv.

Jon Garcia is an accomplished Emmy-nominated filmmaker and songwriter. As a musician he has released 2 studio albums and written scores for award winning feature films. As a novelist he released the co-written novel based on on his screenplay, “The Falls,” which was distributed by Dreamspinner Press. Jon has released ten feature-length films and music videos in a multitude of genres in his career as a filmmaker, including the trilogy of The Falls, The Falls: Testament of Love, and The Falls: Covenant of Grace. The films have screened in film festivals all over the world and have been available on Netflix, Hulu, Amazon, iTunes and many other platforms. As a producer and documentarian, he has worked with Oregon Public Broadcast, Oregon’s PBS station and produced original content for the show Artbeat. Currently he runs his company, Lake Productions, a full service production company that creates feature films, commercials, and music videos. Most recently Jon has produced 3 feature films within a years time, the prison romance “LUZ,” “Strictly for the Birds,” and “Love in Dangerous Times.”