We are giving away a pair of tickets to Marc Broussard @ Revolution Hall on November 1. To win, comment below on this post why you’d like to attend. Winner will be drawn and emailed October 24. 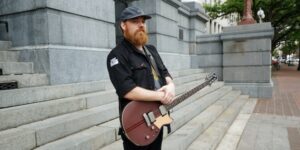 Marc Broussard is an artist with a unique gift of channeling the spirits of classic R&B, rock and soul into contemporary terms. His father, Louisiana hall of fame guitarist of “The Boogie Kings” nurtured Marc’s musical gifts at an early age, and the vibrant Lafayette, Louisiana music scene gave Marc the opportunity to practice his craft consistently from childhood through early adulthood. After releasing a successful independent EP at age 20, Marc signed a record deal with Island Records. Marc’s song “Home” was successful at radio and catapulted him onto the national touring stage. Marc released multiple albums with major labels over the next 10 years, but has recently returned to his independent roots, having released multiple successful original and covers records. The covers records have largely benefited charities via his SOS Foundation (Save our Soul). Marc’s next single, “Fire,” is due out 7/1/22. It’s co-written and produced by Erik Krasno (Tedeschi Trucks, Lettuce, Soulive and more). Marc will be touring non-stop in 2022 in the US and abroad, one of the highlights being Jas Aspen over Labor Day featuring Chris Stapleton, Leon Bridges, and more.

They burst onto the scene with their release of The Green Lights EP in 2018, playing at Bonnaroo, Shaky Knees, KAABOO Del Mar, Summerfest, & Suwannee Hulaween, & supporting renowned acts including Moon Taxi & Ripe. They released The Static EP in 2019 & several singles/music videos in 2020/2021. Their new EP – “Waiting for the Moment” – came out on July 22nd, 2022.

In 2021, they coined the “Where’s Walden Tour,” successfully planning & executing a tour of all 50 states starting on a $50 budget. They performed in a unique array of venues including traditional clubs, museums, breweries, & even a national cave. With the support of their loyal fans, Walden funded the whole operation with merchandise sales, donations, sponsorships, & ticket sales.