We are giving away a pair of tickets to Luna @ Aladdin Theater on January 19. To win, comment below on this post why you’d like to attend. Winner will be drawn and emailed January 16. 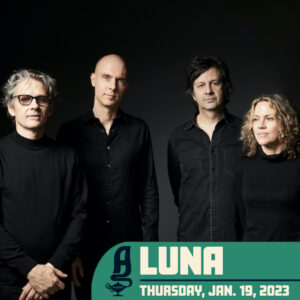 Luna was a New York band formed in 1991 by singer/guitarist Dean Wareham after the breakup of Galaxie 500. The band made seven studio albums before disbanding in 2005. After a ten-year break, they reunited and toured in 2015, and in 2017 released a new LP — A Sentimental Education and an EP of instrumentals — A Place of Greater Safety.

Other recent reissues include a deluxe 2xLP version of their classic Penthouse album (on Rhino) and another 2xLP set Lunafied that collects all the covers the band recorded in the 1990s.

Now scattered around the country (Los Angeles, New York and Austin) the band retains the same lineup that operated from 1999 to 2005: Dean Wareham on vocals/guitar, his wife Britta Phillips on bass, Sean Eden on guitar, and Lee Wall on drums.