This show has been cancelled without reschedule. 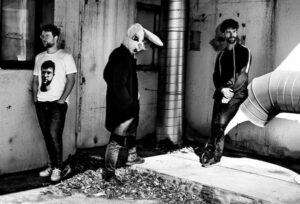 Amsterdam-based alternative act Klangstof is comprised of musicians Koen van de Wardt, Wannes Salomé, and Erik Buschmann. The band first made waves with their debut LP, Closed Eyes To Exit, a majestic confluence of synth-pop, post-rock, and electronic music. Ever since, they have swiftly risen the ranks as one of the most promising European exports, becoming the first Dutch artist to perform at both Coachella and Bonnaroo. After touring with MIIKE SNOW, Jagwar Ma and The Flaming Lips, the EP Everest stretched the band’s dynamics even further, relishing in wayward experimentalism with synths and flirtations with big pop hooks.

This fresh direction beelined into the more electronic-driven second album The Noise You Make Is Silent, putting Klangstof’s versatility and impulsiveness on full display. The writing sessions often had more in common with wacky science fair projects than all-out jams, with all band members circling a grid of effect pedals, laptops, and drum machines, exhuming and harvesting an abundance of unusual sounds. In the first half of 2022, Klangstof released Ocean View, a four-song EP that opts for a more organic, band-oriented sound, completed in “one flow of consciousness.”

For Klangstof’s third album Godspeed to the Freaks, released on September 16th 2022, the trio wrote their most cathartic, emotion-driven and vulnerable material yet. After having their previous tour cut short by the corona pandemic, the band further explored their sheer muscle as a live band, interpreting and fleshing out raw demos forged in Ableton with predominantly physical instrumentation. The songs are essentially proxies for doing live shows, pushing the urgency and electricity of playing together in a room into the recordings.