We are giving away a pair of tickets to Keep Portland Country @ Ponderosa Lounge & Grill on August 26. To win, comment below on this post why you’d like to attend. Winner will be drawn and emailed August 22. 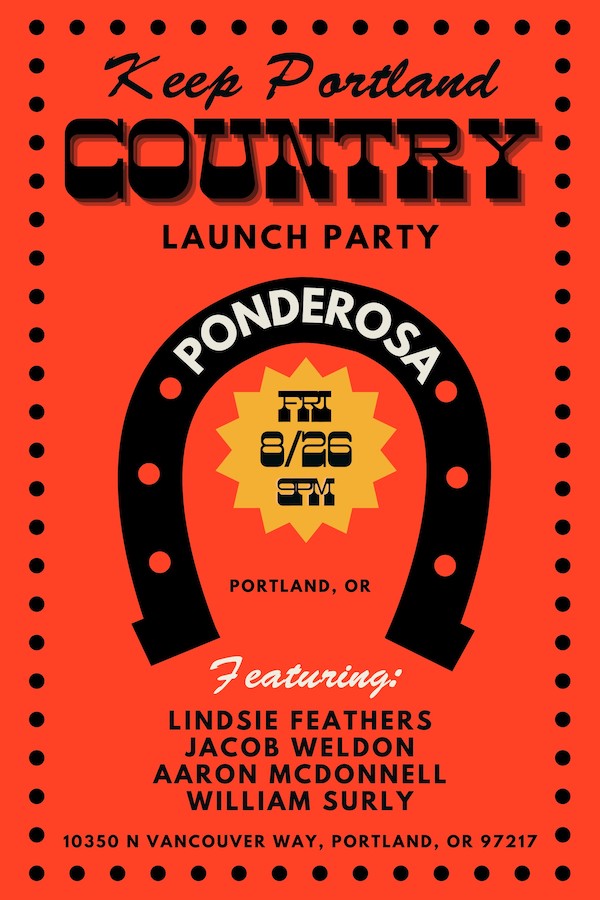 This quartet of country artists are lighting up the stage with country music like you’ve never seen before!

Lindsie Feathers, the Sweetheart of the Rodeo, has roots going back to Chicago where she grew up and cut her teeth playing live music. In 2006, Feathers moved to Oregon and eventually got signed to an independent record label in 2012. Upon releasing a full-length album, she then began touring all over the states. In 2020 when then the pandemic hit and all of her touring stopped, she stayed connected to her creativity by launching a music school called School Of Original Music. Using that platform, she connects on Zoom with people all over the world and teaches them how to write original songs while learning an instrument. Her sounds are the whispers of angels and roars of a cowgirl!

Jacob Weldon’s smooth country vocals shine through in his honky-tonk, and traditional style of county. He been making appearances in venues from California to Portland, and continues to tickle the ears of his fans with his cosmic cowboy vibes.

Aaron McDonnell signs with true purpose. Aaron’s songs explore age-old themes of love, heartache, failure, and faith. They are classic in their influence and unpretentious in their delivery. At once familiar and fresh, Aaron McDonnell is both an authentic homage to the sounds of the past, and an exciting example of what is to come.

William Surly & The Barroom Gospel – Within his music, he mixes classic country with an outlaw, honky tonk, a dash of folk, some rock, soul and a whole lot of tequila. Inspired by story tellers of the Outlaw and Folk movements of the 60’s and 70’s and rejuvenated by the modern sounds of Sturgil Simpson, Margo Price, Mike and The Moonpies, Nikki Lane and more Surly pays homage to the ones who came before him, singing songs for those best suited for a long running bar tab.