We are giving away a pair of tickets to Jay Si Proof, Mr Beautiful @ The Goodfoot Pub & Lounge on January 25. To win, comment below on this post why you’d like to attend. Winner will be drawn and emailed January 23. 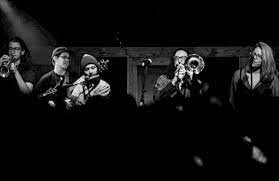 Jay Si Proof was created by trombonist and vocalist Jeff Chilton whose credits include performing with The Diamonds, The Platters, Broken Social Scene, and recording on over 20 albums by Portland based ensembles. Described as “earth jazz alchemists” by Vortex Magazine, Jay Si Proof’s original music plays between rhythmic grooves, personal lyrics, and jazzy harmonies, blending the finesse of a Steely Dan record with the aesthetic of old school funk like The Meters and new school R&B like Erykah Badu. Their music has been featured on Portland’s KMHD radio and abroad in European and South American new music playlists.

Mr. Beautiful is a funk band / art collective hailing from Portland. They’ve been playing music together as a group since summer 2021, although many of their individual members have been making music collaboratively together dating back years. The driving force behind their music is an intensely collaborative creative environment – many of their songs began as improvised jams.