We are giving away a pair of tickets to J2B2 (John Jorgenson Bluegrass Band) @ The Old Church Concert Hall on September 11. To win, comment below on this post why you’d like to attend. Winner will be drawn and emailed September 6. 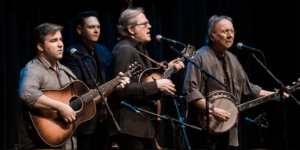 J2B2 is an all-star bluegrass supergroup featuring four legendary, award-winning musicians – John Jorgenson on acoustic guitar, mandolin and vocals; Herb Pedersen on banjo, acoustic guitar and vocals; Mark Fain on bass; and Patrick Sauber on acoustic guitar and vocals – delivering bluegrass like no one has ever heard it before. The band’s undeniable live shows have received stellar reviews and have the bluegrass world buzzing. The four combine forces to form a spot-on union of impeccable musicianship, incomparable songwriting, incredible harmony vocals (a fresh twist combining bluegrass with elements of West Coast folk rock) and seasoned showmanship. This is the “high lonesome sound” of American roots music at its finest.

Jorgenson and Pedersen are founders (with Chris Hillman) of the formative country rock group Desert Rose Band. After working as a freelance musician in Southern California, Jorgenson met Hillman and soon formed the Desert Rose Band. In 1990, Jorgenson went on to found the Hellecasters and toured with Elton John’s band for six years. Artists ranging from Barbra Streisand to Bonnie Raitt to Earl Scruggs have sought out Jorgenson’s guitar work. Jorgenson portrayed Django Reinhardt in the Hollywood feature film Head in the Clouds. In 2008, Jorgenson won a Grammy for Best Country Instrumental with Brad Paisley and was nominated for Best Bluegrass Album with Earl Scruggs.

Patrick Sauber is a multi-instrumentalist who has quickly made a name for himself in the world of bluegrass and old time music. Equally adept on guitar, mandolin and banjo, Sauber has toured with Peter Rowan and Laurie Lewis and appeared on screen in “The Mighty Wind.”