We are giving away a pair of tickets to Indigo Girls & Neko Case @ Pioneer Courthouse Square on June 17. To win, comment below on this post why you’d like to attend. Winner will be drawn and emailed June 13. 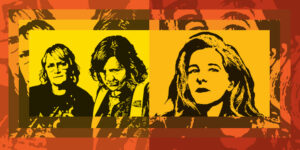 We will follow all state and local Covid-19 guidelines in place at the time of each show. Proof of full vaccination or negative Covid-19 test may be required for entry. Masks may also be required for entry. Please make sure to check the specific concert event page before attending this event, as all policies are subject to change. Pre-Event Emails from Etix will also outline the covid policy for each show. No refunds will be given for PDX LIVE. All Sales Are Final. Rain or Shine.

On their 16th studio album, Indigo Girls tell their origin story. Look Long is a stirring and eclectic collection of songs that finds the duo of Amy Ray and Emily Saliers reunited in the studio with their strongest backing band to date as they chronicle their personal upbringings with more specificity and focus than they have on any previous song-cycle. “We’re fallible creatures shaped by the physics of life,” says Saliers. “We’re shaped by our past; what makes us who we are? And why?”

Produced by John Reynolds (Sinéad O’Connor, Damien Dempsey) and recorded in the countryside outside Bath, England at Peter Gabriel’s Real World Studios, these eleven songs have a tender, revealing motion to them, as if they’re feeding into a Super 8 film projector, illuminating a darkened living room.

Released in 1989, Indigo Girls’ eponymous major label debut sold over two million units under the power of singles “Closer to Fine” and “Kid Fears” and turned Indigo Girls into one of the most successful folk duos in history. Over a thirty-five-year career that began in clubs around their native Atlanta, Georgia, the Grammy-winning duo has recorded sixteen studio albums (seven gold, four platinum, one double platinum), sold over 15 million records, and built a dedicated, enduring following.

Five years have passed since Case’s last solo project, The Worse Things Get, the Harder I Fight, the Harder I Fight, the More I Love You. In the interim, she sang on Whiteout Conditions, the 2017 release from longtime bandmates the New Pornographers. The year before that, she released a vinyl box set of her solo work and joined k.d. Lang and Laura Veirs on the case/lang/veirs project.

Recording that record was a revelation, from Veirs’ innovative guitar tunings to Lang’s skills in studio. “I learned so much experiencing the work ethic of those two,” Case says. She considers Lang “probably the most natural producer I’ve ever seen. Watching her work was awe-inspiring.”

The record was born at the hands of some three dozen performers in all, from k.d. Lang, Laura Veirs, Beth Ditto, and Robert Forster on backing vocals, to Joey Burns of Calexico and Doug Gillard of Guided by Voices on guitars, and Barbara Gruska and Matt Chamberlain on drums. The sidelong perspective is part of the known Neko galaxy, but the production is more expansive and edgier, moving into new universes. These are songs that can swallow you.