We are giving away a pair of tickets to KT Tunstall @ Aladdin Theater on October 7. To win, comment on this post why you’d like to attend. Winner will be drawn and emailed October 4. 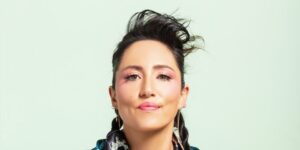 Since scoring a worldwide smash with her debut album ‘Eye To The Telescope’ in 2004, which went on to sell over 5 million copies, KT Tunstall has remained at the forefront of UK singer- songwriter talent. Over the next decade, three further critically acclaimed albums followed; ‘Drastic Fantastic’, ‘Tiger Suit’ and ‘Invisible Empire//Crescent Moon’ in 2007, 2010 and 2013 respectively, keeping the platinum sales rolling and cementing the Scottish singer-songwriter’s reputation as a major recording talent, as well as a mesmerising live artist.

Tunstall has toured the world many times over. She outsold every other female artist in the UK in 2005, won the 2006 Brit Award for Best British Female Solo Artist, won the Ivor Novello Best Song award for her huge, self-penned hit ‘Suddenly I See’, and a Q award for Track of the Year. She also landed a Grammy nomination for Best Female Pop Vocal Performance and lent her tunes to a host of movies and TV shows (‘Suddenly I See’, used in the iconic opening scene of Meryl Streep flick ‘The Devil Wears Prada’)

She has also been awarded the Inspirational Artist gong at the Women In Music Awards and was chosen as the first ever female Grand Marshal (following the likes of Sir Sean Connery) to lead April 2018’s annual New York Tartan Week parade. In May 2018 she and Mike McCready, of legendary multi-million selling Pearl Jam, released a cover of Tom Petty’s huge hit single ‘I Won’t Back Down’ with proceeds going to Pearl Jam’s Vitalogy Foundation.

In 2018, KT performed sold-out intimate headline shows across the UK and US and toured worldwide supporting acclaimed artists including Simple Minds, The Pretenders, Barenaked Ladies and Gary Barlow.

Haley Johnsen is a Portland, Oregon-born musician with a knack for genre-bending and a hard-earned career path that is uniquely her own. Raised listening to powerhouse singers her greatest inspirations become apparent in her soaring vocals, introspective lyricism, and cross-pollinated style of bluesy-Americana, indie-pop, and rock music.

In 2019, Haley released her critically acclaimed 12-track debut album, Golden Days, featuring artist Allen Stone on vocals on one of the project’s highlight tracks, “Weekend.” That same year, Haley toured with the power-trio sister-band Joseph, and with EDM/Indie pop artist Big Wild, who she currently works with as a bassist and backup vocalist.

During her first Europe tour in January of 2019, Haley was granted the opportunity to record an acoustic album at the legendary Abbey Road Studios. Just before her second Europe tour in early 2020, she released her acoustic album, London Sessions, a collection of re-released songs sung live in Studio One. Haley is currently finishing up her 5th studio album and is set to release her first single and video for GONER on September 17, 2021