We are giving away a pair of tickets to Gill Landry (of Old Crow Medicine Show) @ The Old Church Concert Hall on January 21. To win, comment below on this post why you’d like to attend. Winner will be drawn and emailed January 16. 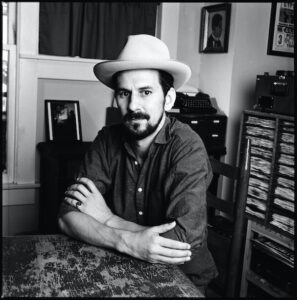 Gill Landry is a two-time Grammy award winning singer/songwriter, multi-instrumentalist, photographer, shade tree mechanic, painter, ranch hand, linocut artist, etc. In his 20+ years as a writer/performer he’s released 5 solo albums and contributed to dozens of others with various artists on multiple labels while touring extensively in the US and abroad. Raised between Louisiana and the Pacific Northwest, he was subject to many different music scenes growing up which reflects across his various albums. He spent the first half decade of his performing life busking on the streets of New Orleans, the west coast, and Europe. His early years seeking adventure close to the ground informs much of his songwriting. In the early 2000’s he met Old Crow Medicine Show playing in Jackson Square one Mardi Gras and in 2004 he joined them, recording and performing with the band from their van-and-trailer days in dives to headlining festivals, winning Grammys, and becoming members of the Grand Ole Opry.

His solo albums are each distinct in feel and style with no two alike and holding few similar influences as his early collaborations. Though his musical styles may vary widely song to song and album to album, his writing has always been honest, poetic efforts at communicating various trappings and joys of life. In 2007 during his tenure with Old Crow, Landry was signed to Nettwerk records which released his solo debut ‘The Ballad of Lawless Soirez’ which was followed by 2011’s self-released ‘Piety & Desire’ which was produced with The Felice Brothers and featured guest artists such as Brandi Carlile and Jolie Holland. He left the band in 2014 to dedicate himself to his own writing. His self-titled third solo album was released on ATO Records in early 2015 featuring a duet with Laura Marling and including a host of other collaborators. 2017 brought ‘Love Rides A Dark Horse’ on the ATO & Loose labels. His most recent album ‘Skeleton At The Banquet’ was recorded in Los Angeles with producer/bassist Seth Ford-Young (Tom Waits / Edward Sharpe). It came out on Loose records less than a month before the pandemic. Gill calls it his “Zombie stillbirth… it still walks the earth even though it was dead on arrival.”

He’s shared stages with Laura Marling, Justin Townes Earle, Brandi Carlile, Michael Hurley, Ben Harper, Mumford & Sons, Bruce Hornsby, Warren Haynes, Nathaniel Rateliff, Ben Howard, to name several. In 2012 he helped write and narrated the film ‘Austin to Boston’ in which he also performs and drove every mile of in a 70’s Volkswagen Bay Window. The film documented a 3000-mile tour from SXSW to Boston and featured Nathaniel Rateliff, Ben Howard, Bears Den, and The Staves. He’s also in the Grammy winning film ‘The Big Easy Express’ which followed a train tour from San Francisco to New Orleans with Old Crow, Mumford and Sons, and Edward Sharpe and the Magnetic Zeros.

He currently lives on a ranch in the Sierra Foothills of California, communing with nature and finishing his next album which will be released in 2023.