We are giving away a pair of tickets to Eric Krasno + Son Little @ Aladdin Theater on February 23. To win, comment below on this post why you’d like to attend. Winner will be drawn and emailed February 21. 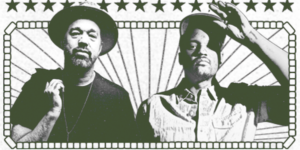 Very few things last forever. Family does though. In the face of trauma, trials, and tribulations, it weathers every storm. Eric Krasno consecrates, commends, and celebrates the permanence of family on his fourth full-length solo offering, Always. The Soulive and Lettuce co-founder, singer, multi-instrumentalist, and two-time GRAMMY® Award-winning songwriter-producer defines himself as not only an artist, but also as a husband, father, and man across these ten tracks with inimitable instrumentation, eloquent songcraft, and raw honesty.

A dynamic career thus far positioned him to present such an everlasting vision. Something of a musical journeyman, his extensive catalog features three solo albums, four Lettuce albums, twelve Soulive albums, and production and/or songwriting for Norah Jones, Robert Randolph, Pretty Lights, Talib Kweli, Aaron Neville, and Allen Stone. As a dynamic performer, he’s shared stages with Rolling Stones, John Mayer, and The Roots. Out of seven nominations, he picked up two GRAMMY® Awards for his role as a songwriter and guitarist on Tedeschi Trucks Band’s Revelator and guitarist on Derek Trucks Band’ Already Free. In 2019, he served up Telescope under the KRAZ moniker.

As the Global Pandemic irrevocably changed the world’s plans, he found himself thinking a lot and writing just as much. “During the past two years, my wife and I got married, bought a house, and had a baby,” he recalls. “When she was pregnant, I kept hearing ‘The Man In Me’. I had heard the song many times before, but it had never quite hit me the way it was hitting me. I recorded it with just acoustic guitar and vocals, and I loved what Otis did to it. He sent it back to me, and I thought, ‘This is exactly how I want to make my next record’. I wanted it to sound like a band but knock like a hip-hop record. We didn’t even have to talk about it. We were going to do the album.”

aloha, the latest album from Son Little, the musical nom de plume of LA’s Aaron Earl Livingston, is available now. As previewed with the release of the invisible EP and early single, “hey rose,” which The New York Times described as comprising “bluesy distorted guitar chords, a hint of Latin rhythm and perhaps a distant echo of the Zombies’ ‘Time of the Season’,” aloha blends classic soul and old-school R&B into a timeless swirl fueled by gritty instrumental virtuosity and raw, raspy vocals. Recorded at Paris’s iconic Studios Ferber with producer Renaud Letang (Feist, Manu Chao), aloha is Little’s first album to be recorded with an outside producer. The result is his boldest, most self-assured statement yet. It’s an ambitious work of vision and reflection, and an ecstatic testament to the freedom that comes from trusting the currents of life to carry you where you belong.

While Little plays nearly every instrument on the album himself, he put his songs in the hands of an outside producer for the first time here. The entire project was an exercise in letting go, in ceding control, in surrendering to fate.