We are giving away a pair of tickets to Dave McMurray’s Grateful Deadication @ The Goodfoot Pub & Lounge on August 11. To win, comment on this post why you’d like to attend. Winner will be drawn and emailed August 9. 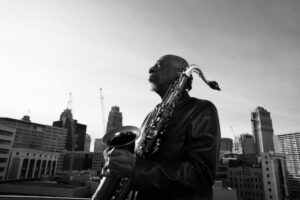 Dave McMurray has taken a long, strange trip to arrive at his sophomore release for Blue Note Records. On Grateful Deadication, the saxophonist takes his gritty, soulful Detroit sound and reimagines the flower empowered songs of San Francisco icons the Grateful Dead with an album as vibrant as it is unexpected. For this spirited excursion into the Dead’s vast repertoire, McMurray reconvened the rhythm section that graced his 2018 Blue Note debut, Music Is Life. This time out, bassist Ibrahim Jones and drummer Jeff Canady are joined by guitarist Wayne Gerardand keyboardist Maurice O’Neal, both longtime compatriots from the Motor City scene, as well as pianist Luis Resto and percussionist Larry Fratangelo, colleagues from McMurray’s days in Was (Not Was).

PLEASE NOTE: Due to the rapid increase in cases and the emergence of the more transmissible Delta variant, all shows at the Goodfoot will require proof of vaccination. Be prepared to either show a vaccine card or a photo of your card. The name on the card must match the name on your ID. We do this to protect our staff, the artists and you. Proof of vaccine is NOT required in the upstairs pub or at the outside tables. We apologize for the inconvenience and thank you in advance for your cooperation.