We are giving away a pair of tickets to Comedy: The Musical @ Cruzroom on January 1. To win, comment below on this post why you’d like to attend. Winner will be drawn and emailed December 30. 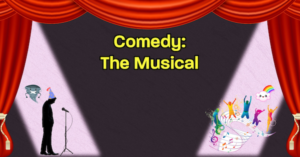 This month our musical theme is hip hop! 🐰✨😎

The show starts at 8 pm and we recommend showing up early to get a good seat! Tickets are available for $5 online (no service fee – yay!) or at the door.