We are giving away a pair of tickets to Bearly Dead @ The Goodfoot Pub & Lounge on October 6. To win, comment below on this post why you’d like to attend. Winner will be drawn and emailed October 3.

From our sponsors:
Bearly Dead 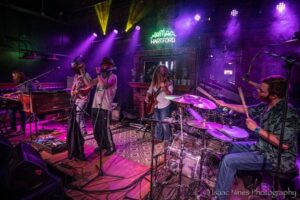 Bearly Dead is an all-star cast of players with deep roots in the New England jam & festival scene. While the band plays all of the Grateful Dead classics, they also dive into an extended catalog, which may include any song that any member of the Dead ever performed. With over 230 songs in rotation and new material being added all the time, Bearly Dead performs wildly different setlists every night and ensures that each show is a unique experience. With no designated “Jerry” or “Bobby”, this band is able to breathe new life into songs with their fresh, high-energy approach to them. Bearly Dead is a setlist-nerd’s dream!

Founded during an intense snowstorm in April 2015, Bearly Dead played its first show at Church of Boston, marking the beginning of its hallowed Wednesday Night Residency. In September of that year, Church was sold and the band found a new home on Wednesday nights at Thunder Road in Somerville. During their 5 years at Thunder Road, Bearly Dead was nominated twice for the Boston Music Award’s “Live Music Residency of the Year,” and burst onto the scene as New England’s premier Grateful Dead tribute band. The phrase “Never Miss A Wednesday Show” became ubiquitous around Boston…and you really never knew what might happen! Bearly Dead’s Wednesday Night Residency at Thunder Road continued unabated every week since its inception in September 2015 until the club’s closing in 2020. Thunder Road was a beacon to all musicians on Wednesday nights to join in the fun, with notable appearances by Mike Campbell (Tom Petty & The Heartbreakers), Paul Wolstencroft (Slightly Stoopid), Steve Molitz (Particle/Phil Lesh & Friends), Kebbi Williams (Tedeschi Trucks Band), Rob Compa (Dopapod), Hayley Jane (Hayley Jane & The Primates), Johnny Trama (Dub Apocalypse), and Gary Backstrom (Gary Backstrom Band); and a surprise appearance by Jerry Garcia’s “Wolf” guitar in 2018 on Jerry Garcia’s birthday! The Wednesday Night Residency was briefly revived in 2021 at The Burren and Sonia before officially ending in May 2022. $12 Adv/ $15 Day of Show.