We are giving away a pair of tickets to An Evening with Jordan Rudess of Dream Theater @ The Old Church Concert Hall on June 12. To win, comment below on this post why you’d like to attend. Winner will be drawn and emailed June 6. 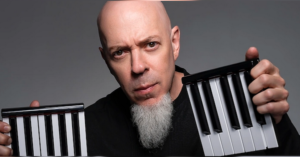 After performing in various projects during the 1980s, he gained international attention in 1994 when he was voted “Best New Talent” in the Keyboard Magazine readers’ poll after the release of his Listen solo album. Two of the bands that took notice of Rudess were The Dixie Dregs and Dream Theater, both of whom invited him to join. Rudess chose the Dregs, primarily as being a part-time member of the band would have less of an impact on his young family.

During his time with the Dregs, Rudess formed a “power duo” with drummer Rod Morgenstein. The genesis of this pairing occurred when a power outage caused all of the Dregs’ instruments to fail except Rudess’, so he and Morgenstein improvised with each other until power was restored and the concert could continue. The chemistry between the two was so strong during this jam that they decided to perform together on a regular basis (under the name Rudess/Morgenstein Project or later RMP) and have released a studio and a live record. RMP did a short U.S. tour in November, 2013.

Rudess has been the full-time keyboardist with Dream Theater, since the recording of 1999’s Metropolis Pt. 2: Scenes from a Memory. He has recorded seven other studio albums with the group: 2002’s Six Degrees of Inner Turbulence, 2003’s Train of Thought, 2005’s Octavarium, 2007’s Systematic Chaos, 2009’s Black Clouds & Silver Linings , A Dramatic Turn of Events, the self titled Dream Theater, as well as their newest album, The Astonishing, a Rock Opera. The story was written by John Petrucci with music written by John Petrucci and and Jordan Rudess. After touring in three continents around the world with The Astonishing, Dream Theater is preparing to embark on a tour in 2017 to commemorate the 25th anniversary of “Images & Words which will see the groundbreaking album performed in it’s entirety along with selections spanning the bands history.