We are giving away a pair of VIP Bar Seats to 5 Guys Named Moe @ Ponderosa Lounge & Grill on February 19. To win, comment below on this post why you’d like to attend. Winner will be drawn and emailed February 14. 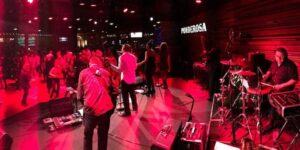 5 Guys Named Moe is a high-energy ​12-piece horn-driven show band that’s sure to be a hit! Entertaining audiences for well over 30 years the band is one of America’s finest cover/party bands!!

But why “5 Guys Named Moe”? … there are more than five people in the band!

With lyrics like “who’s the greatest band around?” and “who makes the cats jump up and down?” 5 Guys Named Moe was originally named after the 1943 hit song by Louis Jordan and started out as a 5-piece in 1984. Over the last thirty-five years however, the band has grown into a slammin’ 12-piece show band that is as much fun to watch as it is to listen and dance to! 5 Guys Named Moe is patterned after the larger, visually creative bands of the 1960’s which used horn sections and back-up vocalists. The resulting full sound—combined with a variety of dynamic lead vocalists and their unique visual energy—sets 5 Guys Named Moe apart from other bands. The band places a premium on providing great music while also entertaining the audience with a fun and energetic performance.