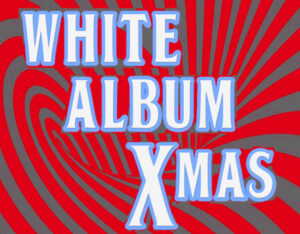 White Album Xmas has become a tradition – a way to keep Portland weird during the holiday season. The NowHere Band – a full 15-piece Beatles orchestra plays the White Album in its entirety, while the jugglers, aerialists, clowns and acrobats of the Rose City Circus present feats of remarkable strength, focus and dexterity. Guaranteed to blow your mind – every time.

The NowHere Band is collection of musicians and friends who gather a couple times a year to recreate the experience of hearing the Beatles’ music performed in a live setting. Unlike other ongoing Beatles “tribute bands” there is no attempt for anyone to be a particular Beatle (no one is designated as Paul, John, George, or Ringo). Instead, the vocal duties and instrumental duties are separated. In addition to the vocals, guitars, keys, bass and drums there are horn and string sections, thus creating a Beatles experience like no other. The members of the NowHere Band include John Averill (Marchfourth) Carl “Solovox” Tietze, Sarah King, Jason Wells (Saloon Ensemble), Ryan Moore Arthur Parker, Chet Lyster (Eels), and David Langenes. The band is a true family of friends who love to play together, and when it comes to performing the Beatles’ music, the modus operandi is “accuracy with feeling.”