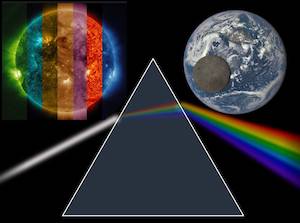 Astronomers cannot visit anything outside the solar system, and even the relatively nearby Sun is far too hot to approach. So how do they learn about chemical compositions, temperatures, and magnetism of stars? How do they detect exoplanets? How can they measure their mass? And how can they ever understand the atmospheres of such far-away bodies? All of that is learned by unraveling the light captured in telescopes.

In this talk, astrophysicist Karel Schrijver will take you to from the Earth to the Sun, the stars, and to exoplanets to explore the information hidden in the rainbow of colors emitted by their own light. Starting with infrared pictures of animals and the glow of molten steel, we go up in temperature until we reach the fascinating shapes on the surface of the Sun at thousands of degrees, and even the X-ray light of its million-degree outer atmospheres. From there we can look out at the stars and their planets. It is a detective story of patient observers, finding patterns in what was at first not understood, but eventually revealed the true nature of the stars and even the scale of the universe.