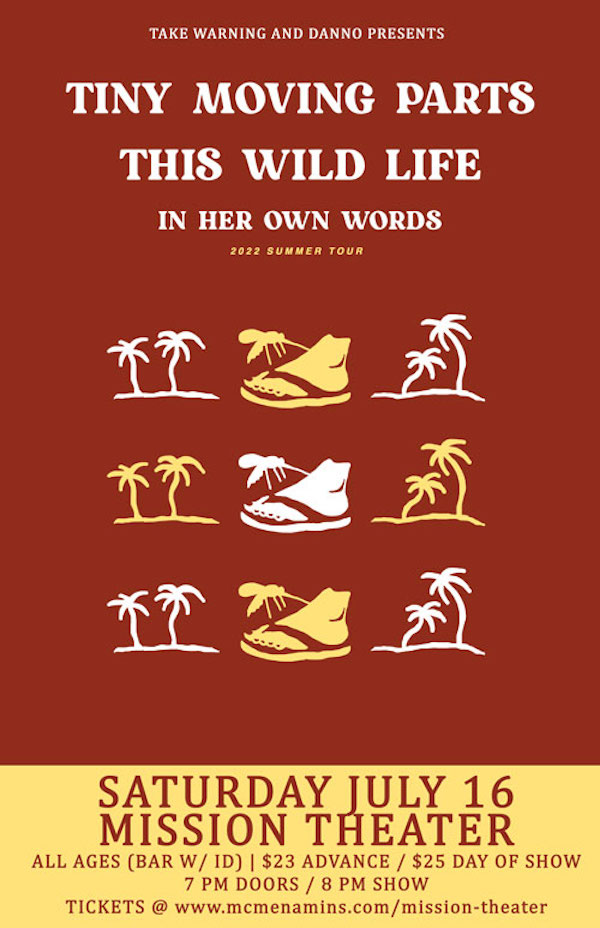 Tiny Moving Parts with special guests This Wild Life and In Her Own Words perform live at Mission Theater.

Tiny Moving Parts is a self-described family band consisting of brothers William Chevalier (drums) and Matthew Chevalier (bass, vocals), and their cousin Dylan Mattheisen (guitar, vocals) who were also all students at Benson High School. The trio started playing together in junior high and have been together since then. After releasing their first album Waves Rise, Waves Recede, the Ocean Is Full of Waves, they followed up with their second, Moving to Antarctica on June 19, 2010. Their third album, This Couch Is Long & Full of Friendship, was released through Kind of Like Records on January 13, 2013. On June 12, “Clouds Above My Head” was released as a free download. On July 9, the album was released physically. Later in the month, the group toured alongside The Front Bottoms, Frameworks and Hostage Calm.

This Wild Life
Formed in December 2010, This Wild Life began as a pop punk band with former members of the band The Messenger, which disbanded in July 2010. On May 7, 2013, it was announced that they would be recording with Copeland’s Aaron Marsh. The change from a full band to an acoustic duo was because there was more attention to their acoustic songs, and acoustic songs are easier on Kevin Jordan’s vocals. Although it was a difficult decision, the change opened them up to new opportunities.