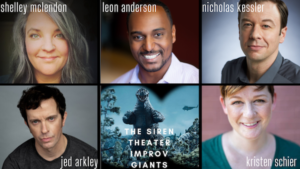 The Siren Theater is all about comedy and tonight we bring you a night of personal stories and smart and sexy improv comedy from some of Portland’s best and most experienced improvisers (think Upright Citizens Brigade or Second City)! The audience provides a suggestion that inspires our monologists personal stories told right on the spot, then the Giants make up hilarious scenes based on these stories.

Featuring the improv comedy of these Giants:

Proof of vaccination required for entry