We are giving away tickets for one car to see Deadpool on September 24-26. To win, comment on this post why you’d like to attend. Winner will be drawn and emailed Friday September 25. 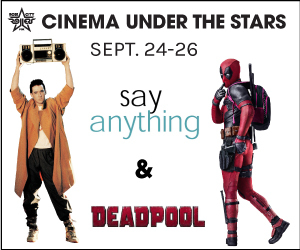 Starting at 7:30PM, RCR will be showing Say Anything… a 1989 American teen romantic comedy-drama film written and directed by Cameron Crowe in his directorial debut. The film follows the romance between Lloyd Dobler (John Cusack), an average student, and Diane Court (Ione Skye), the class valedictorian, immediately after their graduation from high school. (Rated PG 13)

And at 9:30PM, RCR will be screening Deadpool: a 2016 American superhero film based on the Marvel Comics character of the same name. Distributed by 20th Century Fox, it is the eighth film in the X-Men film series. Directed by Tim Miller, it stars Ryan Reynolds in the title role as he becomes the wisecracking antihero Deadpool.

RCR has transformed the face of their iconic venue, The Hangar (located at 7805 SE Oaks Park Way), into a 15 foot tall DIY movie screen for your viewing pleasure. Many thanks to Epson for their generous donation of a projector, Horne Audio for the use of cables, and our friend/sound tech DJ Agent Meow for making this possible!

Reserve your spot at the GET TICKETS link, and don’t forget to check out our awesome SNACK PACK option!

Event information may change due to air quality. Confirm details with event organizers.