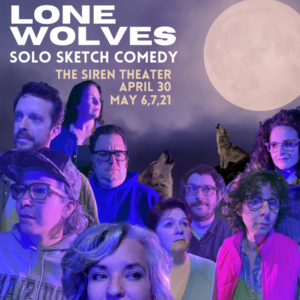 The Lone Wolves are a collective of some of the smartest and funniest sketch comedians in Portland, and they are back with a brand new show filled with smart and sexy sketch comedy performed alone and on stage! You’ve seen them at Portland Center Stage, at The CoHo Theater, in the Portland Sketch Comedy Festival, and online during lock down with their parody Masterclass shows, and now you can see them in their home at The Siren Theater! 4 shows only.

Written and performed by