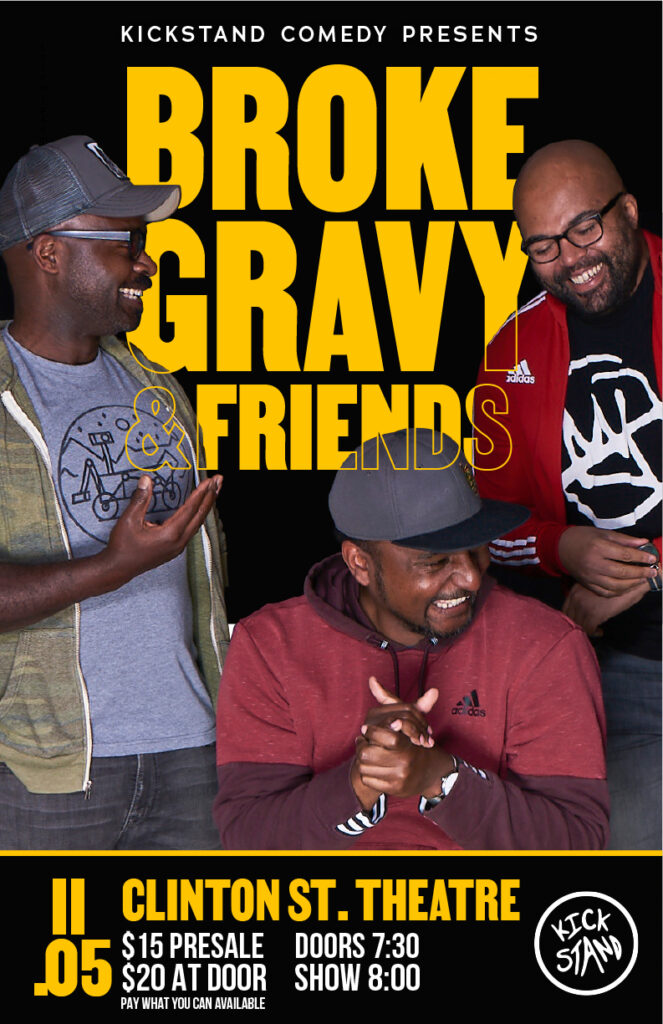 Chris, Leon, and Eric (them Broke Gravy boys) are bringing some color to your autumn season… with a little help from a few of our friends of course.

We’ll give you one set filled with our special blend of Broke Gravy improv comedy, and then we’ll be joined by two of our favorite improvisers (and people)—Kara Moore (Kickstand Comedy) and Rachel Rosenthal (North Coast)—for a special on-time only set. Guaranteed to be something you’ve never seen before, and will never see again.

Plus, a portion of every ticket will go towards Kickstand Comedy’s BIPOC Improv Program.

We’ll see you at Clinton Street Theater on November 5!

**Kickstand Comedy strives to eliminate barriers from comedy – a portion of seats at every Kickstand show are pay-what-you-want at the door.

As three Black Americans, they utilize our unique voices to spark thoughtful conversations on and off comedy stages.

Through a candid dialogue, they’ll exchange their experiences with those of their audience—exploring deeper perspectives on comedy, relationships, and humanity.

“A group that clearly knows one another well and can build off each other with confidence.”-Portland Mercury

“This group is hard to predict but always puts on a wonderful show?”-Portland Mercury