We are giving away a pair of tickets to Eldridge Gravy & The Court Supreme at The Goodfoot on Saturday, December 3rd. To win, comment below on this post why you’d like to attend. Winner will be drawn and emailed December 2. 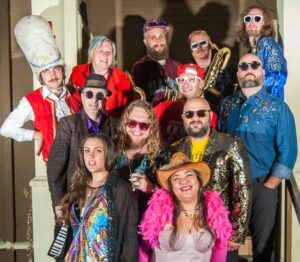 Eldridge Gravy & The Court Supreme is a funk juggernaut. Backed by the hot, gritty orchestration of the 13 member Court Supreme, front man Eldridge Gravy easily works dance floors to a fever pitch with his full-bore performance and smooth rapport with the audience. In 2017, the group released their self-titled fourth studio album. Recorded by Jason Gray of Polyrhythmics & Blue Mallard Studios, mixed by Floyd Reitsma at Studio Litho.

Portland-based Far Out West strikes a relentlessly engaging balance between funk-infused rock and a jazz-informed collaboration, making them stand out as one of Portland’s most creative electric quartets to groove their way across the West Coast in recent years. Since the band’s inception in 2016, their high energy performances and upbeat instrumentation continue to raise the spirits of their audiences, one sensational beat at a time.