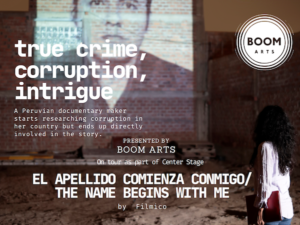 Chaska Mori, a documentary filmmaker researching corruption in her country, ends up directly involved in the story. After her father dies, she returns to Perú and uses her inheritance to buy land on the outskirts of Lima for the site of her future home. Before she can inhabit it, land smugglers invade. Thus starts her years-long Kafkaesque legal battle navigating a system where the law of the strongest prevails and unearthing a life changing family secret.

El apellido comienza conmigo/The name begins with me will be performed April 1 through April 10, 2022; Fridays and Saturdays at 7 PM, Sundays at 2 PM; at the Imago Theatre, 17 Southeast 8th Avenue, Portland, OR 97214. Tickets are priced at a sliding scale, $20-$50, and can be purchased at https://ci.ovationtix.com/34673/production/1106296. Inquiries about Oregon Trail cardholder and group rates can be emailed to [email protected]. The show is performed in Spanish with English subtitles. Proof of vaccination and masks will be required to attend.

According to Chaska Mori, “This is a story told by a woman in a man’s world, and against a backdrop of a legal fight for justice…. It’s a world where the strongest survives and wins. The story is also a story about truncated patriarchy. It’s a mirror of our society. The ones who hold the family and our communities together are women. Men hold the power, but are often absent. The same thing happens at the highest levels, so the microcosm is a metaphor — and the starting point of our story.”

As described by the Santiago a Mil International Theater Festival (Santiago de Chile, January 2020): “In a space between testimony and autofiction, Chaska Mori exposes the fine line between what’s legal, illegal and unfair in an everyday melting-pot that extends from families and to all levels of a fractured society. Only affection allows us to accommodate both illusory fiction and suffocating reality.”

Fílmico was founded by Chaska Mori and Daniel Lagares. Mori describes Fílmico as “an ensemble of independent artists…. We are dedicated to exploring reality through the lens of documentary. Our three venues of research are photography, film, and theater. We are driven by the belief that, based on our subjective point of view, we can develop nonfiction narratives that expose the reality of life.”

Fílmico is part of Center Stage, a public diplomacy initiative of the U.S. Department of State’s Bureau of Educational and Cultural Affairs with funding provided by the U.S. Government, administered by the New England Foundation for the Arts in cooperation with the U.S. Regional Arts Organizations. General management is provided by Lisa Booth Management, Inc. Information about Center Stage is at www.CenterStageUS.org.
Also, El apellido comienza conmigo/The name begins with me is a co-production by Pacific University’s Cultural Centre (Perú), Lagartijas Tiradas al Sol (Mexico) and Fílmico; supported by Iberescena.