We are giving away a pair of tickets to Keola Beamer & Henry Kapono @ Aladdin Theater on January 27. To win, comment below on this post why you’d like to attend. Winner will be drawn and emailed January 24. 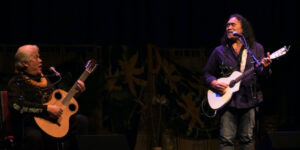 “Kapono is one of the great island songwriters of his generation.” –Honolulu Star-Advertiser

Keola Beamer’s contributions to slack key guitar during the 1970s began to spark public interest in kī-hō‘alu, launching a statewide revival of the tradition, and his 1978 release, Honolulu City Lights, is the largest selling recording in the history of Hawaiian music. Today he is one of Hawai’i’s premier singer-songwriters, arrangers, composers and masters of the Hawaiian slack key guitar. “He’s an exceptional musician, a very good player and beautiful singer. He’ll bring the spirit of the island to the concert.” – Paul Simon

Despite their common history, Keola & Henry only performed together for the first time in 2014, when Henry invited Keola & Moana Beamer to be part of Back in the Day performances. This successful annual show features Hawai‘i’s musical greats who shaped Hawaiian music from the ‘70s on, part of the “Hawaiian Renaissance” — the seminal movement in Hawai‘i’s cultural history that brought language, music, hula, art, and all aspects of Hawaiian culture back to their central place in the life of the Islands.