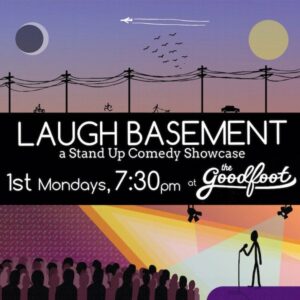 Laugh Basement is back on Monday, February 6th with an epic lineup of hilarious comics including headliner The Real Hyjinx!

Born and raised in Asheville, NC; bred and perfected in the cities of Las Vegas, Atlanta and Portland, The Real Hyjinx is an infusion of music and comedy that has made him a fast-rising all around entertainer. He has appeared on AMC’s Showville (Summer ’13) as a finalist and was voted Fan Favorite. He is a well known performer and is a co-founder of the NW Black Comedy Festival. The Real Hyjinx has shared the stage with Rodney Perry (The Monique Show), Honest John (The Wash), the late great Ricky Harris (Everybody Hates Chris), Ralph Porter (BET’s CommicView), Tony Roberts & Easu McGraw (Lil Yellow Bus Tour), Nate Jackson (Wild’ N Out), Eric Blake (P. Diddy Presents Bad Boys of Comedy) to name a few. He can currently be seen hosting and performing in the Pacific Northwest and beyond.

Every first Monday Laugh Basement is hosted by comedian Hewitt Pagenstecher who is accompanied by his friend and DJ, BHOLT at The Goodfoot in SE Portland. Doors open at 7PM and comedy starts at 7:30. $10 cash at the door.