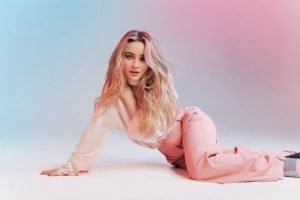 Seventeen-year-old singer, songwriter and actress Sabrina Carpenter’s journey into music, television and film began at the age of two when she followed in her older sister’s footsteps as a beginning ballerina. As her passion and skill in dance flourished, Sabrina surprised her family and friends by discovering her unique vocal talents. Her budding acting career began in theater before moving from the stage to film & television, landing her first role as a guest start on Law & Order SVU. Subsequent roles have included Young Chloe on Fox’s The Goodwin Games and Maya Hart in the Disney Channel series Girl Meets World, which concluded in early 2017. Staying true to her first love of music, Carpenter released her debut album Eyes Wide Open at the age of 15.

Fueled by youthful exuberance and irresistibly buoyant singles such as “Eyes Wide Open” and “We’ll Be the Stars,” the album reflected Carpenter’s life over the previous three years. With the release of her sophomore album EVOLution in October 2016, the gestation period was shorter, but clearly encompassed even more growth. Having co-written on the album, Carpenter sought to “work with people who are young and hungry – people like me.” The album’s current single, the instantly catchy “Thumbs” is pushing through to Top 40 all across the country with more than 23+ million streams on Spotify. Outside of the studio, Carpenter’s live shows reflect her boundless energy. She embarked on her first-ever, sold out headline EVOLution Tour, traveling across 35+ cities in the United States, and will join The Vamps as a special guest on their UK arena tour this May before heading out on The De-Tour, her 30+ date summer headline trek.