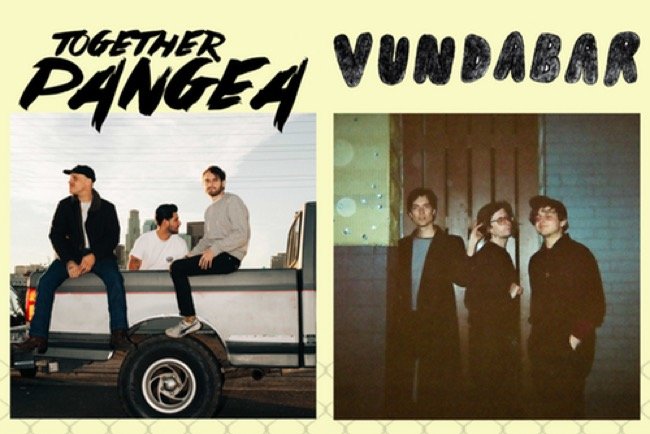 Vundabar is a rock and roll band from Boston, Massachusetts, comprising Brandon Hagen on vocals and guitar, Drew McDonald on drums, and Zack Abramo on bass. They recently released their debut album ‘Antics’.

Love is everyday magic. That’s the impression you get listening to Water, the new album by Chicago trio Dehd. Love rises up into the atmosphere like steam off a summer sidewalk and makes you wild. Love breaks your heart and you consider yourself lucky for it. Like water itself, it surrounds us, it supports us; it’s what we’re made of. It takes the shape of its container.

That’s something Jason Balla, Emily Kempf, and Eric McGrady discovered quickly after forming Dehd in 2014. Balla and Kempf are both veterans of Chicago’s increasingly fruitful DIY scene (Balla with Ne-Hi and Earring, Kempf with Vail and formerly with Lala Lala). When they joined forces with first-time drummer Eric McGrady, they discovered they shared a strange and inexplicable chemistry. The music they make — hazy and reverb-drenched, a scuzzy and hyped-up take on surf rock that could only come from the Third Coast — came so intuitively, it made all three feel like they were stewards of something bigger than themselves, even while that very thing is unmistakably drawn from their own personalities. “There’s always been this easy grace about the band because we purely just love doing it,” Balla says of their immediate coherence.

Urban Adventure Quest has created an interactive scavenger hunt that combines the fun of the Amazing Race with a three-hour sightseeing tour of Portland. Guided from any smart phone, groups make their way among well-known and overlooked gems of the city, solving clues and completing challenges while learning local history. END_OF_DOCUMENT_TOKEN_TO_BE_REPLACED

You can still take advantage of Artist Repertory Theatre’s holiday half subscription sale! These tickets in a package are cheaper than individual tickets. END_OF_DOCUMENT_TOKEN_TO_BE_REPLACED

A luxurious tropical vacation deep in the heart of the jungle. What could go wrong, right? You and your friends have been kidnapped overseas and are being held for ransom! You see the scattered luggage and passports of past victims and feel entirely hopeless. But if you can outwit your captors, and soon, you may just have a chance at survival! END_OF_DOCUMENT_TOKEN_TO_BE_REPLACED