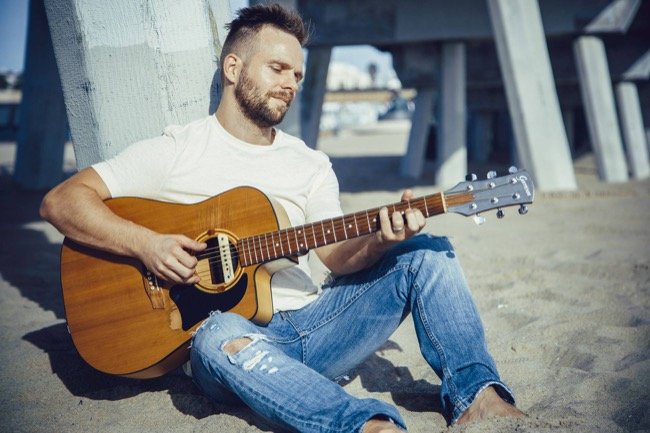 Tom Goss is an indie singer-songwriter who mixes tender ballads with folk/pop. A prolific writer and performer, he has released seven albums and played more than a thousand shows across the US, Canada, and Europe to a growing group of dedicated fans.

Tom has been compared to Brett Dennen and Mat Kearney — but with a distinct voice shaped by his identity as a gay man and his unusual history. A college wrestler turned Catholic seminarian turned award-winning musician, Tom weaves his story throughout a powerhouse performance that moves between touching love songs and high-energy anthems.

Tom’s songs have been heard on ABC, HBO, in several films, and his inventive music videos (Son of a Preacher Man, Breath and Sound, Bears, Click), which have been viewed more than seven million times. Tom has shared a stage with performers as diverse as Andy Grammer, Martha Wash, Taylor Dane, Steve Grand, Adrianne Gonzalez, Matt Alber, and Catie Curtis, and he enjoys a particularly strong following in the LGBT community.

A native of Kenosha, Wisconsin, Tom went to college in Missouri on a wrestling scholarship with plans to become a schoolteacher. A year of student teaching in Illinois changed his mind, but he still wanted to make a difference in the world — so he decided to become a Catholic priest and moved to Washington DC to enter seminary. Disillusioned by his experiences there, and with a growing awareness that he was gay, Tom found himself in music and began a career as a touring performer.

Currently based in Los Angeles, Tom will be touring the US in Spring/Summer 2018 with a brand new multimedia show that incorporates guitar, storytelling, and video.

Urban Adventure Quest has created an interactive scavenger hunt that combines the fun of the Amazing Race with a three-hour sightseeing tour of Portland. Guided from any smart phone, groups make their way among well-known and overlooked gems of the city, solving clues and completing challenges while learning local history. END_OF_DOCUMENT_TOKEN_TO_BE_REPLACED

NOTE: In the spirit of creating an atmosphere where people from all parts of our community are coming together to volunteer, Team Captains are only able to reserve up to 50% of the spots on any individual MLK Weekend of Service Project. END_OF_DOCUMENT_TOKEN_TO_BE_REPLACED

You can still take advantage of Artist Repertory Theatre’s holiday half subscription sale! These tickets in a package are cheaper than individual tickets. END_OF_DOCUMENT_TOKEN_TO_BE_REPLACED

The Rose City Classic (RCC) is one of the most popular dog events in the US, and the biggest dog show series in the West. Every January thousands of the best dogs in the country and their owners descend on Portland to compete at the RCC. The Rose City Classic attracts the top vendors of specialty dog products in the United States. They offer every kind of product a dog lover could want from dog beds to fine art and jewelry! This is the big one… don’t miss it! END_OF_DOCUMENT_TOKEN_TO_BE_REPLACED