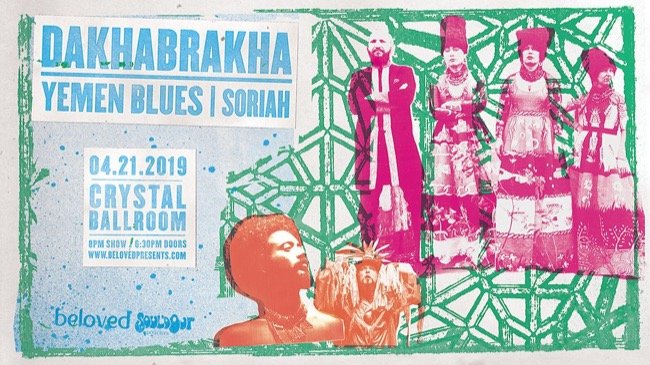 The name DakhaBrakha is original, outstanding and authentic at the same time. It means «give/take» in the old Ukrainian language.

DakhaBrakha was created in 2004 at the Kyiv Center of Contemporary Art «DAKH» by the avant-garde theatre director – Vladyslav Troitskyi. Theatre work has left its mark on the band performances – their shows have never been staged without the scenic effects.

Having experimented with Ukrainian folk music, the band has added rhythms of the surrounding world into their music, thus creating bright, unique and unforgettable image of DakhaBrakha. It will help to open up the potential of Ukrainian melodies and to bring it to the hearts and consciousness of the younger generation in Ukraine and the rest of the world as well.

At the crossroads of Ukrainian folklore and theatre their musical spectrum is intimate then riotous, plumbing the depths of contemporary roots and rhythms, inspiring «cultural and artistic liberation».

Urban Adventure Quest has created an interactive scavenger hunt that combines the fun of the Amazing Race with a three-hour sightseeing tour of Portland. Guided from any smart phone, groups make their way among well-known and overlooked gems of the city, solving clues and completing challenges while learning local history. END_OF_DOCUMENT_TOKEN_TO_BE_REPLACED

You can still take advantage of Artist Repertory Theatre’s holiday half subscription sale! These tickets in a package are cheaper than individual tickets. END_OF_DOCUMENT_TOKEN_TO_BE_REPLACED

A luxurious tropical vacation deep in the heart of the jungle. What could go wrong, right? You and your friends have been kidnapped overseas and are being held for ransom! You see the scattered luggage and passports of past victims and feel entirely hopeless. But if you can outwit your captors, and soon, you may just have a chance at survival! END_OF_DOCUMENT_TOKEN_TO_BE_REPLACED

Bare Bones Cafe and Bar is a neighborhood spot on SE Belmont in Portland. Stop by Wednesdays for $1 off all Whiskey. END_OF_DOCUMENT_TOKEN_TO_BE_REPLACED