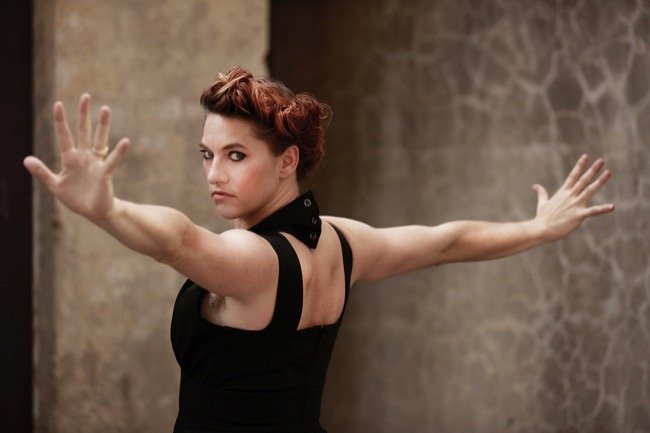 Amanda first came to prominence as one half of the internationally acclaimed punk cabaret duo The Dresden Dolls. In 2008, she released her debut solo album, Who Killed Amanda Palmer, produced by Ben Folds and accompanied by a fine art photography book featuring text by esteemed author Neil Gaiman (who Palmer has since married). After parting ways with her record label in 2010, she self-released two EPs: Amanda Palmer Performs The Popular Hits of Radiohead On Her Magical Ukelele and Amanda Palmer Goes Down Under, along with a musical theater-esque Evelyn Evelyn album and tour with Jason Webley.

Amanda is widely known as “The Social Media Queen of Rock-N-Roll” for her constant and disarmingly intimate engagement with her fans via her blog, Tumblr, and Twitter (800,000+ followers), and has been at the vanguard of using both “direct to fan” and “pay what you want” (patronage) business models to build and run her business. In May of 2012 she made international news when she raised nearly $1.2 million pre-selling her new album, Theatre is Evil, along with related merchandise and “experiences” via Kickstarter. Theatre is Evil went on to debut in the “Billboard Top 10” when it was released on Sept. 11, 2012, and has been released in over 20 countries on her own label, 8ft records.

Amanda was invited to present a “TED Talk” at TED’s 2013 Conference. To date her Talk, “The Art of Asking”, has been viewed more than 8 million times worldwide. 2013 also saw the release of “An Evening with Neil Gaiman & Amanda Palmer”- a 3 CD collection of tracks culled from a live tour with her husband and best-selling author Neil Gaiman.

Following upon the success of her TED Talk- Amanda expanded her philosophy into a book. The Art of Asking was released worldwide in November of 2014 and became a New York Times Best Seller. In support of the book, Amanda is currently touring solo for the first time since 2011, hitting stages with a mix of rocking keyboard originals, ukulele ballads, and readings from The Art of Asking.

Urban Adventure Quest has created an interactive scavenger hunt that combines the fun of the Amazing Race with a three-hour sightseeing tour of Portland. Guided from any smart phone, groups make their way among well-known and overlooked gems of the city, solving clues and completing challenges while learning local history. END_OF_DOCUMENT_TOKEN_TO_BE_REPLACED

NOTE: In the spirit of creating an atmosphere where people from all parts of our community are coming together to volunteer, Team Captains are only able to reserve up to 50% of the spots on any individual MLK Weekend of Service Project. END_OF_DOCUMENT_TOKEN_TO_BE_REPLACED

You can still take advantage of Artist Repertory Theatre’s holiday half subscription sale! These tickets in a package are cheaper than individual tickets. END_OF_DOCUMENT_TOKEN_TO_BE_REPLACED

The Rose City Classic (RCC) is one of the most popular dog events in the US, and the biggest dog show series in the West. Every January thousands of the best dogs in the country and their owners descend on Portland to compete at the RCC. The Rose City Classic attracts the top vendors of specialty dog products in the United States. They offer every kind of product a dog lover could want from dog beds to fine art and jewelry! This is the big one… don’t miss it! END_OF_DOCUMENT_TOKEN_TO_BE_REPLACED