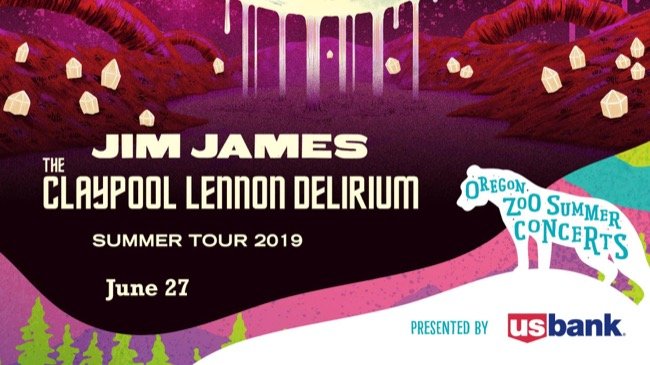 Jim James has spent the better part of almost two decades as the lead singer, songwriter and multi-instrumentalist of My Morning Jacket. Through seven studio albums, My Morning Jacket has grown into one of the most acclaimed rock ‘n’ roll bands in the world. Alongside the band’s recording and touring, James has maintained a steady flow of solo work and extra curricular activity. James released his debut solo record, REGIONS OF LIGHT AND SOUND OF GOD in 2013, followed three years later by 2016’s ETERNALLY EVEN, which debuted at #1 on Billboard’s “Top Alternative Albums” chart. James’ third solo album, UNIFORM DISTORTION, arrived in June 2018 and was received with immediate acclaim. “There are enough artistic twists and turns to please even the most dedicated Jacket fan,” declared American Songwriter, “showing that James remains as musically edgy as ever on an album that pulses with energy, enthusiasm and the restless spirit James has always personified.”

The Claypool Lennon Delirium
SOUTH OF REALITY, The Claypool Lennon Delirium’s epic new sophomore album, might be just the antidote this sick world needs. Music so potent it could repel an asteroid impact from space, these seasoned warriors of psychedelia have crafted timeless songs that may as well be chiseled in stone. The monolithic dream team’s new record was produced by Les Claypool and Sean Lennon themselves, and engineered and mixed by Les Claypool at his own Rancho Relaxo studio in Sonoma County, CA. SOUTH OF REALITY is available worldwide now via ATO Records.

The Claypool Lennon Delirium recently heralded SOUTH OF REALITY with “Blood And Rockets: Movement I, Saga Of Jack Parsons – Movement II, Too The Moon,” streaming now HERE. The six-and-a-half minute track was hailed by Rolling Stone as “a sprawling epic that finds Lennon and Claypool crooning and snarling, respectively, over spacey synths and chiming guitars,” adding “[SOUTH OF REALITY] feels like an organic extension of (2016’s) THE MONOLITH OF PHOBOS, blending the wildly surreal and psychedelic with satirical social commentary.”

Urban Adventure Quest has created an interactive scavenger hunt that combines the fun of the Amazing Race with a three-hour sightseeing tour of Portland. Guided from any smart phone, groups make their way among well-known and overlooked gems of the city, solving clues and completing challenges while learning local history. END_OF_DOCUMENT_TOKEN_TO_BE_REPLACED

This service is perfect for busy freelancers, small business owners and activists who know the value of a monthly newsletter, but don’t have enough time to put one out on a monthly basis. END_OF_DOCUMENT_TOKEN_TO_BE_REPLACED