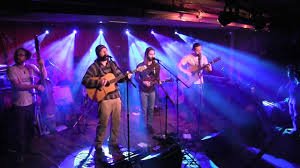 Join us for an evening with Mars Retrival Unit! Described by many as a band where every member has equal shred capabilities, Mars Retrieval Unit brings it to the table with their fusion of spacey funk, rock and psychedelia. As a unit, MRU defines the word genre-hoppers, and leaves no musical rock unturned and no minds un-spaced. The music is sometimes danceable, sometimes cerebral, with both female and male vocals cutting through a densely crafted wall of sound. With the addition of saxophone to a jam band – you will hear nothing else like it. Through the years, the band has waxed and waned; first formed in Florida by guitarist Rob Sipsky in 2004, then resurrected in Portland with sax/singer Chelsea Luker in 2005, the search for like-minded musicians was completed in 2008 with the addition of bassist Joel Davis, drummer Murray Gusseck and Joshua Birns-Sprague on keyboards.

Urban Adventure Quest has created an interactive scavenger hunt that combines the fun of the Amazing Race with a three-hour sightseeing tour of Portland. Guided from any smart phone, groups make their way among well-known and overlooked gems of the city, solving clues and completing challenges while learning local history. END_OF_DOCUMENT_TOKEN_TO_BE_REPLACED

This service is perfect for busy freelancers, small business owners and activists who know the value of a monthly newsletter, but don’t have enough time to put one out on a monthly basis. END_OF_DOCUMENT_TOKEN_TO_BE_REPLACED