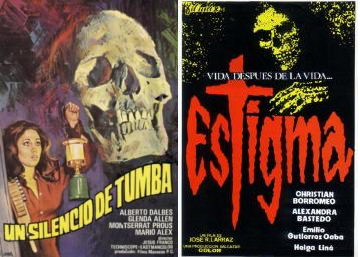 Join us for an end-of-the-summer night of creepy, gore and more.

While not exactly the consensus of opinion, I actually found ‘Un Silenzio de Tumba’ to be a rather magnificent, enjoyable and surprisingly chaste Jess Franco thriller. The low-key, Agatha Christie-style pot-boiler concerns the fervid, and soon to be murderous goings-on during a not-so swinging soiree held on a isolated island retreat. Franco really delivers on the escalating tension and creepy atmospherics here; many erroneously simply think of him as a hyper-psychedelic T & A man (and, to be far, he might well be the best!) but he was also a highly skilled filmmaker, and I genuinely feel that ‘Un Silencio De Tumba’ is ample proof of his fine artistry. ‘Un Silencio de Tumba’ is a racking yarn, and would certainly be appealing to all obsessive, euro-cultists and uber-biased Franco obsessives alike! Top Hole! (And like many other laudable Franco efforts this also boasts a tremendously effective score.)

The death of Sebastian’s father engenders in him pathological fears and hallucinations. His death wishes seem to cause horrible accidents, which he is unable to control. When his older brother dies, he feels that he has caused it. He undergoes hypnosis, but his apparent supernatural powers continue. As his own life nears its end, he becomes even more violent and sadistic.

Urban Adventure Quest has created an interactive scavenger hunt that combines the fun of the Amazing Race with a three-hour sightseeing tour of Portland. Guided from any smart phone, groups make their way among well-known and overlooked gems of the city, solving clues and completing challenges while learning local history. END_OF_DOCUMENT_TOKEN_TO_BE_REPLACED

This service is perfect for busy freelancers, small business owners and activists who know the value of a monthly newsletter, but don’t have enough time to put one out on a monthly basis. END_OF_DOCUMENT_TOKEN_TO_BE_REPLACED