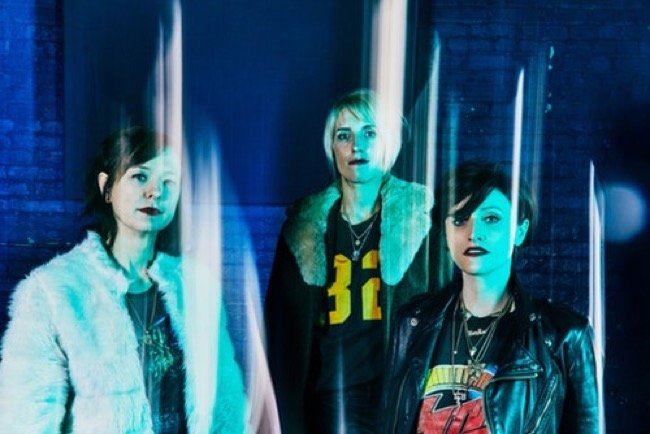 When Ex Hex exploded onto the scene with their unfettered brand of rock and riffage, the power trio for our generation had finally arrived. Made up of Mary Timony (guitar, vocals), Betsy Wright (bass, vocals), and Laura Harris (drums), the group’s 2014 debut Rips was a gleaming collection of tightly wound gems that scored Best New Music honors from Pitchfork, the top spot on Magnet Magazine’s Best of 2014 list, and No. 11 in that year’s Pazz & Jop critics poll. Near-constant touring throughout 2015 and 2016 established the band as a force to be reckoned with: an audacious three-piece distilling rock music to its essence with formidable skills and a reputation for frenzied and unabashedly fun live shows.

On It’s Real, the group’s forthcoming second album, Ex Hex’s commitment to larger-than-life riffs and unforgettable hooks remains intact, but the garage-y, post-punk approach that defined Rips has grown in scale and ambition. What started as a reaction to the blown-out aesthetic of Rips would test the sonic limits of the power trio and lead the band on a quest for a more immersive and three-dimensional sound. Vocal harmonies are layered ten tracks deep, solos shimmer and modulate atop heaving power chords, and the codas linger and stretch toward new frontiers of sound. On first listen, you might think you’ve unearthed a long-lost LP carved from the space where crunch-minded art rock and glitter-covered hard rock converge, an event horizon at the intersection of towering choruses and swaggering guitars.

Urban Adventure Quest has created an interactive scavenger hunt that combines the fun of the Amazing Race with a three-hour sightseeing tour of Portland. Guided from any smart phone, groups make their way among well-known and overlooked gems of the city, solving clues and completing challenges while learning local history. END_OF_DOCUMENT_TOKEN_TO_BE_REPLACED

You can still take advantage of Artist Repertory Theatre’s holiday half subscription sale! These tickets in a package are cheaper than individual tickets. END_OF_DOCUMENT_TOKEN_TO_BE_REPLACED

A luxurious tropical vacation deep in the heart of the jungle. What could go wrong, right? You and your friends have been kidnapped overseas and are being held for ransom! You see the scattered luggage and passports of past victims and feel entirely hopeless. But if you can outwit your captors, and soon, you may just have a chance at survival! END_OF_DOCUMENT_TOKEN_TO_BE_REPLACED