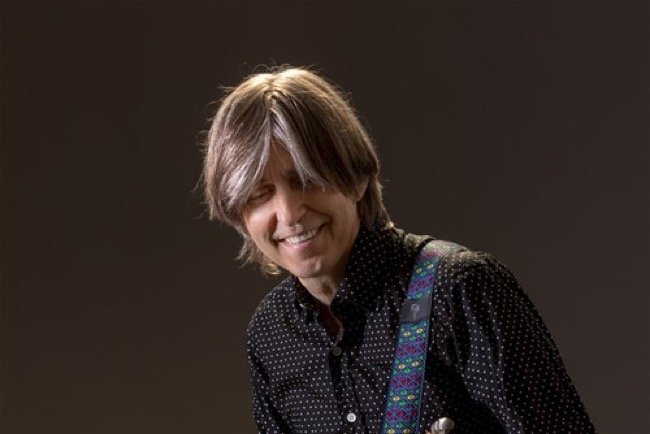 The guitar has been very good to Eric Johnson, earning him international renown as a player, composer, recording artist and live entertainer as well as an ever-growing audience of admirers. And Eric Johnson has been very good to the guitar, spotlighting its myriad melodic, sonic and lyrical splendors, paying homage to its heroes and innovators, collaborating and playing with many of its finest contemporary talents, and fostering its continuing vibrancy as a primarily instrumental genre in popular music.

“He’s an extraordinary guitar player accessible to ordinary music fans,” notes the Memphis Commercial Appeal. That’s because Eric Johnson plays music and not just the guitar. He is also a gifted player of the piano (his first instrument) as well as songwriter, singer and song interpreter. Or more succinctly, Eric Johnson is a diverse, versatile and fully realized musical creator who plays guitar like no one else

The pivotal event in Johnson’s rise to becoming, as Guitar Player says, “one of the most respected guitarists on the planet,” was his million-selling, now-classic 1990 album Ah Via Musicom (which loosely translates as “communicating through music”). It was his second release, following Tones, his 1986 major label debut.

Musicom yielded three Top 10 singles – “Cliffs of Dover,” which has become Johnson’s signature song and won a Best Rock Instrumental Grammy, and “Trademark” and “Righteous.” It made him the first artist to ever score three Top 10 instrumentals. Now, 28 years later, he revisits that landmark recording with a 2018 tour on which he will play the album – hailed as a “masterwork” in Amazon.com’s review – in its entirety.

The Austin, Texas-based Johnson also closes out 2017 with a new album, Collage, that combines five new original songs with five covers that reflect both his inspirations and range: An acoustic version of Jimi Hendrix’s “One Rainy Wish,” The Beatles classic “We Can Work It Out” in a Caribbean groove, B.B. King’s “Rock Me Baby,” the surf rock classic “Pipeline” and Stevie Wonder’s 1966 #3 pop hit “Uptight (Everything’s Alright).”

Arielle
Arielle is considered a music industry triple threat because she could enjoy an impressive career solely as a singer, songwriter or guitar player, but she has combined all three of those gifts to create a unique artistry that defies genres and borders.

She recently opened for Gregg Allman and traveled to Los Angeles in late September as the lone female and only Nashvillian to compete in Guitar Center’s Onstage with Vince Gill contest. A New Jersey native who was raised in California, she has already made the cover of Guitar Player magazine and released the single “California,” which reached No. 3 on CMT Pure. She was also cast as a guitar player in the TV show Nashville. She is gaining comparisons to Karen Carpenter and Eva Cassidy for her pure voice with a four-octave range.

Urban Adventure Quest has created an interactive scavenger hunt that combines the fun of the Amazing Race with a three-hour sightseeing tour of Portland. Guided from any smart phone, groups make their way among well-known and overlooked gems of the city, solving clues and completing challenges while learning local history. END_OF_DOCUMENT_TOKEN_TO_BE_REPLACED

NOTE: In the spirit of creating an atmosphere where people from all parts of our community are coming together to volunteer, Team Captains are only able to reserve up to 50% of the spots on any individual MLK Weekend of Service Project. END_OF_DOCUMENT_TOKEN_TO_BE_REPLACED

You can still take advantage of Artist Repertory Theatre’s holiday half subscription sale! These tickets in a package are cheaper than individual tickets. END_OF_DOCUMENT_TOKEN_TO_BE_REPLACED

The Rose City Classic (RCC) is one of the most popular dog events in the US, and the biggest dog show series in the West. Every January thousands of the best dogs in the country and their owners descend on Portland to compete at the RCC. The Rose City Classic attracts the top vendors of specialty dog products in the United States. They offer every kind of product a dog lover could want from dog beds to fine art and jewelry! This is the big one… don’t miss it! END_OF_DOCUMENT_TOKEN_TO_BE_REPLACED