We are giving away a pair of tickets to Ari Joshua @ The Goodfoot Pub & Lounge on February 13. To win, comment on this post why you’d like to attend. Winner will be drawn and emailed February 12. 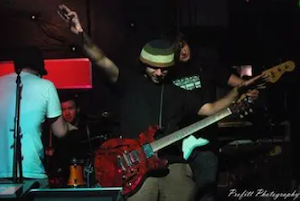 Ari Joshua was born in Cape Town, South Africa but was raised in Seattle, WA where his early days as an artist were spent discovering his musical calling. His hard work and raw talent were quickly recognized, and Ari was awarded a scholarship to study music on the East Coast after high school. “Moving to New York and studying music for 5 years was one of the richest experiences of my life,” says Ari. “It was my fellow students and mentors at The New School, and Mason Gross School of the Arts, from whom I began to appreciate the true power of musical expression.”

Despite being relatively under the radar, Ari Joshua has recorded, performed and rubbed shoulders with a list that reads like a highly diverse who’s who of the music scene today.

What sets Ari apart is is his ever evolving, consistent practice and openness to playing diverse genres so that every time Ari picks up his instruments, it’s always fresh. “I play with an intensity… as if I were playing my axe for the last time.” His playing has grabbed the attentions of Rock ‘n Roll Legends- Stone Gossard (Pearl Jam), featuring Ari on his Solo Album; Michel Shreive (Santana), who proposed Ari be the lead guitarist of his band; and when Ari started his own Rock Band (Big High), he attracted Barrett Martin (Mad Season & Screaming Trees) and Peter Buck (REM).

He’s recently relocated to PDX and tonight begins his deep dive into our local music scene. Come show some Stumptown love and welcome Ari to our wonderful music community as he’s joined by Galen Clark and others. $6