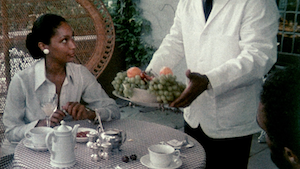 Bill Gunn, the independent film icon you’ve probably weren’t told about, wrote and directed the experimental art-house horror spectacle, Ganja & Hess after being approached by a production company to make a film similar to the popular “Blacula.” Gunn had different plans. Ganja & Hess is a testament to independent filmmaking and experimentation. The story follows anthropologist Dr. Hess Green (Duane Jones), after he’s stabbed with an infected ancient ceremonial dagger by his assistant (portrayed by Gunn). Now racked with a newfound lust for blood, Dr.Hess must satisfy his cravings by any means necessary. Gunn toyed with the conventions of the horror genre and opted for a more existential take on the canonical vampire while maintaining an air of mystique that makes the vampire so alluring. Though Gunn’s work was stifled, never fully receiving the reach and praise it deserved, Ganja & Hess remains an achievement in filmmaking and a glowing example of refusal of pre-established colonial artistic norms. Plus, its honestly such a sexy movie.