We are giving away a pair of tickets to We Banjo 3 @ Aladdin Theater on February 23. To win, comment on this post why you’d like to attend. Winner will be drawn and emailed February 21. 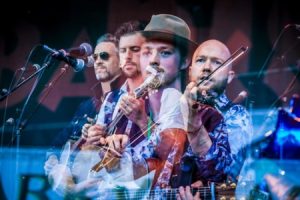 For all the innovation and invention that goes into modern music these days, it’s the inspiration derived from one’s roots that proves the most enduring. So credit Galway, Ireland’s We Banjo 3 for finding common ground between old world tradition and authentic Americana. We Banjo 3’s fifth album, Haven, released in 2018 has achieved International critical acclaim, and is adored by for their irrepressible and ever-growing legion of fans. Haven became the first Irish album to reach Billboard Bluegrass No.1 and was awarded Best Folk Album in the RTE Folk Awards, the national broadcaster of Ireland.

Following on from their three previous acclaimed studio albums (String Theory, 2016, Gather the Good, 2014, and Roots of the Banjo Tree, 2012) the power of Haven relates to the band’s sublime fusion of Irish and American roots music, while continuing to grant audiences an encounter with the most authentic of traditional sounds. In the nine years since their formation in the city of Galway on the rugged west coast of Ireland, We Banjo 3 have garnered multiple awards and accolades as diverse as Billboard World #1 and Bluegrass No #1 to RTE Folk Album of the Year, to Irish Times Album of the Year to Songlines Magazine Top of the World Award to featuring in the top 30 No-Depression folk Albums of 2018. The band has played for US and Irish Presidents, members of Congress and multiple ambassadors Europe-wide, as well as performing live to over 400,000 people annually across a multitude of Irish, Folk and Roots festivals in the US. Variously described as “The Irish Punch Brothers” and “transcending even the best superlatives”, the band has now evolved into an astonishing song-writing unit, one whose latest album achieves a new gold standard for the combined powers of banjo, mandolin, fiddle and guitar.