We are giving away a pair of tickets to McTuff @ The Goodfoot on January 25. To win, comment on this post why you’d like to attend. Winner will be drawn and emailed January 24. 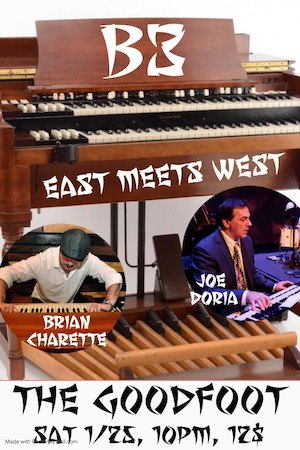 Do you like funky soul jazz played by fiery Hammond organists??? If so, don’t miss this summit where the best of the East meets the best of the West!! Hammond organist Joe Doria brings together the best of the NW’s music scene to create a powerful and jaw-dropping funk and jazz behemoth, exhibiting a mix of stellar musicianship, seasoned songwriting and deep groove where no musical stone gets unturned. McTuff features the impeccable Andy Coe on guitar and the incredible D’Vonne Lewis on drums.

McTuff has performed at Bumbershoot, the New Orleans Jazz Fest, as well as festivals and venues all over the US. The band has also held a residency at Seattle’s legendary Seamonster Lounge for over five years. Their Tuesday night show has become regular stop for local and traveling musicians including Skerik, Allen Stone, Jeff Coffin (Dave Matthews Band), G Love (and Special Sauce), Blake Lewis, Kevin Sawka, and many others.

Seriously, don’t miss this show. the jams are going to be deep, funky and stellar!!!!