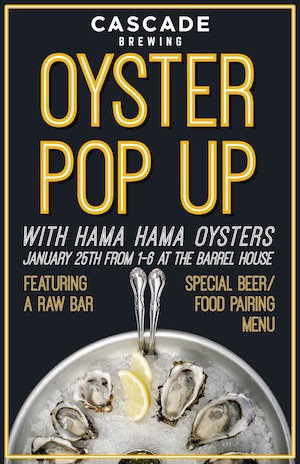 The Cascade Brewing Barrel House will be presenting an Oyster Pop Up featuring fresh Hama Hama Oysters later this month. The event will take place on Saturday, Jan. 25 from 1 p.m. to 6 p.m.––or until the oysters run out––at the Cascade Brewing Barrel House at 939 SE Belmont St. There is no admission to the event, and reservations are not required; all ages are welcome.

Cascade’s Oyster Pop Up will feature a raw bar with fresh shucked oysters on the half shell from Hama Hama Oyster Farm, as well as oyster pâté, oysters Rockefeller, a Cascade sour beer mignonette––a piquant sauce made to sprinkle on top of the oysters––and clam chowder. All items are available for purchase individually.

The event will serve Cascade’s two beach-themed beers: Ocean Views Hazy Pale Ale, a tropical hazy pale ale with notes of pineapple and citrus; and Coastal Gose, a blend of sour wheat ales aged in oak barrels with ground coriander seed and sea salt. Cascade has committed to donating a portion of the profits from sales of all Coastal Gose bottles to the Surfrider Foundation. Also available will be bottles of chilled vintage 2014 Gose.

About Cascade Brewing Barrel House
Founded in Portland, Oregon in 1998, Cascade Brewing has been a pioneer in the sour beer renaissance since 2006 and the proud innovator of the Northwest Sour Ale. The Cascade Brewing Barrel House, also known as The House of Sour, is Cascade Brewing’s Eastside Portland pub. It features at least 20 sour beers on tap at any given time, including one tap reserved for sour beer straight from the barrel. It also offers taps dedicated to nitro, blender reserve, and non-sour beers. To complement the beers, the Barrel House features a limited menu of small plates, sandwiches, salads and desserts, all made with local Northwest ingredients. Learn more at CascadeBrewingBarrelHouse.com and engage at @CascadeBrewing.