We are giving away a pair of tickets to Back Fence PDX: Russian Roulette Storytelling @ The Old Church on February 1. To win, comment on this post why you’d like to attend. Winner will be drawn and emailed January 27. 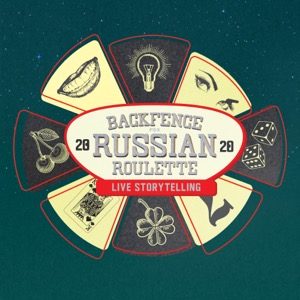 RUSSIAN ROULETTE is our high stakes, high-risk live storytelling show where six seasoned performers spin a giant game show wheel filled with mystery prompts. Storytellers have just 5 minutes to prepare and tell a true 5-minute story based on the prompt they land on — the audience votes for the winner!

This show features THREE past winners, a returning crowd fave, and TWO first-timers, all telling compelling funny/poignant/gross/sexy/mysterious on-the-spot stories. The audience votes for a winner at the end of the night. The winner also draws an audience winner — both get a rad swag bag of booty from our sponsors and partners!

CHRIS WILLIAMS December RUSSIAN ROULETTE Winner, Creator of Front Porch Sessions and The Turnout Storytelling Series at Alberta Street Pub, Does a Spot-On Marlon Brando Impression (Heavier Marlon Brando), Has Never Drank Coffee Ever, Not Once, In His Life

ALEX DANGWriter, Storyteller at Head Start, Knows too Much About the Show Friends, Former Speech/Debate Champion

STEPHANIE STRANGE Winner of Raw Artist of the Year, Comic Book Writer,  Band Leader of Strange & the Familiars, Watched the Original Charmed Series at Least Three Times All the Way Through

20 Responses to Win Tickets ($32): Back Fence PDX: Russian Roulette Storytelling @ The Old Church | Tellers Have 5 Minutes to Prepare a True Story Based on Mystery Prompt