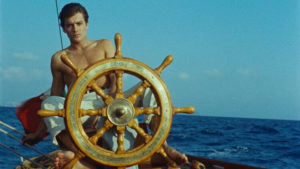 Starring the gorgeous Alain Delon in his first major film role, and directed by Réné Clément, Purple Noon (Plein soleil) is a French & Italian co-production based on Patricia Highsmith’s novel The Talented Mr. Ripley. Released in 1960, the film was immediately met with critical and financial acclaim. There is little more to say on the film, as it did not garner any controversies, nor did its production encounter any incredible obstacles. What follows is an elegant and visually pleasing (did I mention how unbelievably pretty Alain Delon is?) crime film, and sometimes that’s really all you need.

MANY ACCIDENTS HAVE OCCURRED IN THIS AREA… CAUTION!

Packed with enough tough talk, slick camerawork, and dark secrets to leave any noir fan drooling, Take Aim at the Police Van is a hard boiled and off kilter crime thriller. Directed by Japanese counterculture hero Seijun Suzuki,the film follows a prison driver hunting down a mysterious sniper who killed two prisoners he was transporting.